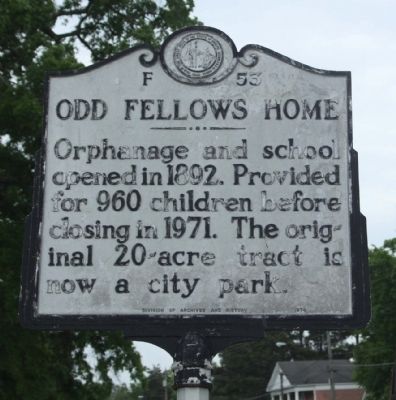 Photographed By Mike Stroud, April 19, 2013
1. Odd Fellows Home Marker
Inscription.
Odd Fellows Home. . Orphanage and school opened in 1892. Provided for 960 children before closing in 1971. The original 20-acre tract is now a city park. . This historical marker was erected in 1974 by Division of Archives and History. It is in Goldsboro in Wayne County North Carolina

Orphanage and school opened in 1892. Provided for 960 children before closing in 1971. The original 20-acre tract is now a city park.

Erected 1974 by Division of Archives and History. (Marker Number F-53.)

Topics and series. This historical marker is listed in this topic list: Notable Places. In addition, it is included in the North Carolina Division of Archives and History series list. A significant historical year for this entry is 1892. 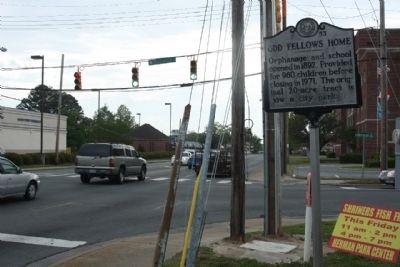 Regarding Odd Fellows Home. The Independent Order of Odd Fellows, a benevolent fraternal organization, began in America around 1819; in time, clubs spread throughout the country. One of the principal goals of the organization was to assist widows of members and ensure the upbringing of members’ orphans. North Carolina’s first Lodge of Odd Fellows was formed in 1841, and others soon followed suit. Throughout its early development, the North Carolina Lodge sought to collect funds to attend to the needs of its orphans and, in 1890, a meeting of the Grand Lodge sought to establish an orphanage, funded by donations from all lodges in the state. In 1891, land was purchased in Goldsboro and a Building Committee was established to oversee construction of housing on the property. The first children arrived in 1892, shortly after completion of the first building.

The Odd Fellows Home was formally authorized in 1895, when it was recognized as the legal guardian of the 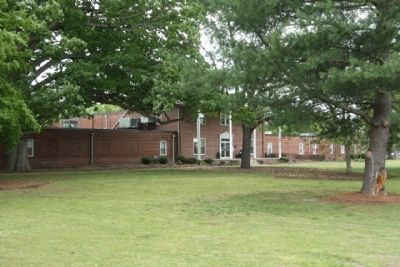 Photographed By Mike Stroud, April 19, 2013
3. Odd Fellows Home at the site today
children under its care by the state legislature. More children arrived and, to respond to the needs of the Home, the Odd Fellows sponsored the construction of new dormitories under the leadership of Nathaniel Jacobi, a wealthy Wilmington merchant. The home served almost 200 children by 1913 and there were more applications than there was space available. The Odd Fellows found funding wherever possible and established an endowment for the preservation of the home.

The last children at the Home who were orphans of the Odd Fellows arrived in 1950 and, as society changed, so did the home. From the 1950s onward, more and more children were arriving who had no connection to the Odd Fellows, while overall numbers of children served by the home decreased. Meanwhile, the buildings began to show their age and funding was scarce. Therefore, the Odd Fellows sold portions of the property and downsized the home to accommodate new child care regulations and declining attendance and income. In 1969 it was decided, after much consideration and review, that the home would operate until a shortage of funds or children would justify closing the facility. In 1970, the Odd Fellows decided that the home should be closed. The remaining children were sent to other facilities and the property was sold. Some of the buildings have been preserved and are considered eclectic examples of early twentieth century construction. (North Carolina Office of Archives & History — Department of Cultural Resources)
Credits. This page was last revised on July 2, 2021. It was originally submitted on August 12, 2013, by Mike Stroud of Bluffton, South Carolina. This page has been viewed 496 times since then and 14 times this year. Photos:   1, 2, 3. submitted on August 13, 2013, by Mike Stroud of Bluffton, South Carolina.
Share this page.