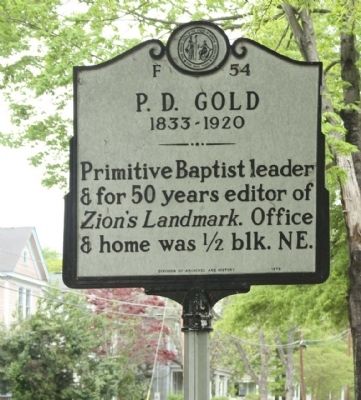 By Mike Stroud, April 18, 2013
1. P.D. Gold Marker
Inscription.
P.D. Gold. Primitive Baptist leader & for 50 years editor of Zion's Landmark. Office & home was ½ blk. NE. . This historical marker was erected in 1979 by Division of Archives and History. It is in Wilson in Wilson County North Carolina

Erected 1979 by Division of Archives and History. (Marker Number F-54.)

Topics. This historical marker is listed in these topic lists: Churches & Religion • Communications. 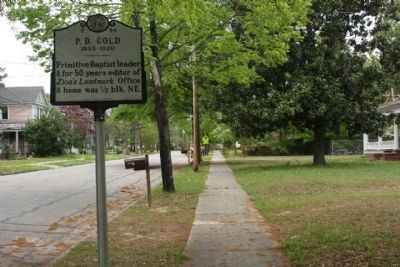 By Mike Stroud, April 18, 2013
2. P.D. Gold Marker seen near the intersection of Vance Street NE and Maplewood Avenue,
A prominent publisher and religious leader, Pleasant Daniel Gold was born in 1833 to Milton and Martha Fortune Gold in what in now Cleveland County, North Carolina. An ambitious young man, P. D. Gold sought to attend school and move beyond his agrarian upbringing. As such, he borrowed money and went to school, studied law, and received his license in 1856. He began to practice law in Shelby as a partner with future Governor John W. Ellis. Soon after establishing himself in Shelby, Gold decided to enter the ministry. He then attended Furman University and Southern Baptist Theological Seminary. His educational pursuits were interrupted by the Civil War when he enlisted in the Confederate army, serving as a chaplain and nurse until a fever ended his military service.
In the late 1860s, Gold decided to change his church affiliation and switched from the Missionary Baptist Church, or “New School,” to the Primitive Baptist Church, or the “Old School.” He joined the Kehukee Primitive Baptist Church of Halifax, home of the state’s most active Primitive Baptist organization. Gold was such a dynamic personality in his new calling that he joined the church, was baptized, ordained, and preached a sermon all in the same day. As part of his new mission, he co-founded a newspaper called Zion’s Landmark in 1867 with L. I. Bodenheimer. Gold became associate editor 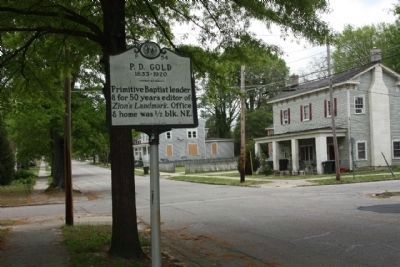 By Mike Stroud, April 18, 2013
3. P.D. Gold Marker looking south along at and Maplewood Avenue
in 1871 and served as editor from 1872 until 1920. The paper became the leading publication of the Primitive Baptist Church.
Gold also served the Primitive Baptist Church as a pastor throughout the state and was seen by contemporaries as a leading figure in the North Carolina church. His home on Maplewood Avenue in
Wilson served as his base of operations, where he published Zion’s Landmark and also founded the P. D. Gold Publishing Company in 1902. His publishing company issued the Daily Times and the Semi-Weekly Times and was later incorporated as The Wilson Daily Times Publishing Company.
In 1863, while Gold served as a missionary Baptist pastor in Goldsboro, he met and married his first
wife, Julia Pipkin. The couple had eleven children before Julia’s death in 1913. Gold later married Eugenia Burton of Winston-Salem, who died in 1940. P. D. Gold died in 1920 and is buried at Maplewood Cemetery in Wilson. (North Carolina Office of Archives & History — Department of Cultural Resources)
Credits. This page was last revised on November 29, 2019. It was originally submitted on August 12, 2013, by Mike Stroud of Bluffton, South Carolina. This page has been viewed 677 times since then and 5 times this year. Photos:   1, 2, 3. submitted on August 18, 2013, by Mike Stroud of Bluffton, South Carolina.
Share This Page.