Warren Gamaliel Harding was born November 2, 1865, in Blooming Grove, Ohio, to Dr. George Tryon Harding and Phoebe Dickerson Harding. The family moved to the village of Caledonia, and then to Marion.

Harding attended village schools and Ohio Central College in Iberia, Ohio. At the age of 19, he and two partners purchased the bankrupt Marion Daily Star. After buying out his partners, Harding steadily improved the newspaper, and it began to make money. Harding owned The Star for nearly 40 years. On July 8, 1891, Harding married Florence Kling DeWolfe.

Harding entered politics in 1900, serving two terms in the Ohio Senate. He then became lieutenant governor of Ohio and was elected to the United States Senate in 1914. At the 1920 Republican National Convention, he won the nomination for president on the 10th ballot. The convention chose Calvin Coolidge as his running mate. The Democrats nominated Ohio Governor James Cox. Franklin Delano Roosevelt was Cox's running mate.

Harding's front porch campaigns was the fourth – and last – in American

Click or scan to see
this page online
history. His campaign slogan, "A Return to Normalcy," expressed his goal of bringing balance to the U.S. economy and way of living. On his 55th birthday, he won the presidency with more than 60 percent of the popular vote.

During his 29 months in office, he started the Budget Bureau and was the first president to present a federal budget to Congress. He arranged the first world peace conference, called the Washington Disarmament Conference, and he also established the Veterans Bureau.

While on a cross-country trip to the western states, Canada, and the Alaska Territory, President Harding died of a heart attack in San Francisco on August 2, 1923.

Born to Amos and Louisa Kling on August 15, 1860, in Marion, Florence developed a keen mind for business, politics and world affairs. She received her formal education in Marion and became an accomplished pianist at the Cincinnati Conservatory of Music.

In 1879, Florence married Henry "Pete" DeWolfe. The couple had a son, Marshall, but their marriage ended in divorce. In the late 1880s, she met the young publisher of The Marion Daily Star at a dance. Florence and Warren Harding were married on July 8, 1891, in their newly built home. Today, the Harding Home and Museum, at 380 Mt. Vernon Avenue, contains many of the couple's belongings.

By Duane Hall, September 19, 2012
3. Harding Memorial Marker
Panels 9 to 12
the next 32 years, Florence supported Warren's newspaper and political careers. She was business manager and head of The Star's circulation department for 12 years. Calling the hectic Marion campaign for the presidency the highlight of her life, Mrs. Harding was the perfect hostess to newsmen, campaign workers, and the volume of visitors during the summer and fall of 1920.

As First Lady in 1921, Florence championed women's issues and became an advocate for single, working women and women in the business world. She supported women's professional sports and held press conferences with female journalists. Mrs. Harding also focused on wounded veterans from World War I.

After President Harding died on August 2, 1923, Florence's poor health forced her to return to Marion. She died from heart and kidney disease on November 21, 1924.

In the summer of 1920, Republican presidential candidate Warren Harding launched a campaign front he front porch of his Marion home. He was the fourth president—all from Ohio—to use such a campaign.

During the three-month campaign, Harding gave more than 100 official speeches from his porch and hundreds of impromptu speeches. More than 600,000 people from across the United States traveled to hear Harding speak. He spent most of the last month of the campaign 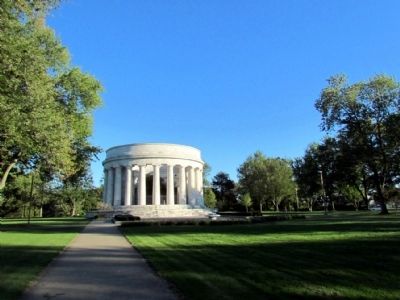 By Duane Hall, September 19, 2012
4. Harding Memorial and Tomb
Marker is located near front of memorial and tomb
giving speeches in a dozen other states.

When Warren Gamaliel Harding assumed office March 4, 1921, the new president faced the task of leading the nation through a transition from World War 1 to peacetime. In a post-war recession, America had rising unemployment, a high national deficit, and fears of Communism and the influx of immigrants.

During Harding's administration, he realized many of his goals, including: 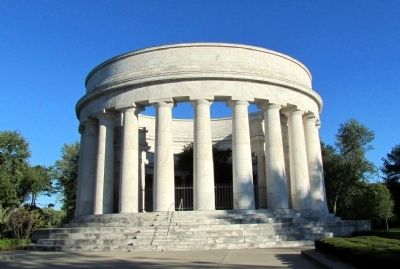 By Duane Hall, September 19, 2012
5. Harding Memorial and Tomb
and sanitation
• Ending hostilities with Germany by signing the Treaty of Berlin

In June 1923, President and Mrs. Harding embarked on a trip across the continent and to the Alaska Territory. The trip marked the first time that a president had visited Canada or the Alaska Territory. During the trip, Harding died from a heart attack on August 2, 1923, at the Palace Hotel in San Francisco, California.

A grief-stricken nation marked the progress of the funeral train that carried President Harding's body from California to Washington, D.C. in august of 1921. The train crawled through small farm towns and large cities as throngs of people paid their respects. After services at the Capitol, the cortege proceeded to Marion, Ohio, where the body was placed in the receiving vault at Marion Cemetery.

On December 21, 1927, the bodies of President and Mrs. Harding were removed from the receiving vault and placed in the completed Harding Tomb. Mrs. Harding had passed away on November 21, 1924.

On June 16, 1931, President Herbert Hoover dedicated the tomb, erected to the memory of Warren Gamaliel Harding, the 29th President of the United States. Hoover said in his eulogy,

This beautiful monument, erected by the voluntary subscriptions of the people, symbolize their respect for this memory. It 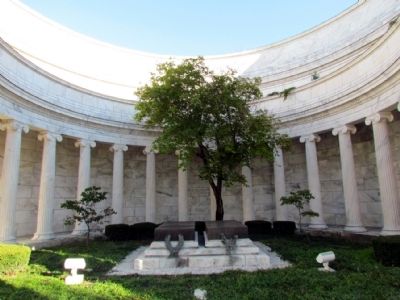 By Duane Hall, September 19, 2012
6. Resting Place of Warren and Florence Harding
has been their response with tender remembrance to a kindly and gentle spirit.

As future years come and go, each of them will be marked by gatherings here of his friends and the people of a grateful democracy, for democracy has ever paid respect and tribute to those who have given her service.

Warren G. Harding came from the people. Born just at the close of the Civil War, it became his responsibility to lead the republic in a period of reconstruction from another great war in which our democracy had again demonstrated its unalterable resolve to withstand encroachment upon its independence and to deserve the respect of the world.

When in two years he died, new peace treaties had been made in terms which won the support of our people; tranquility had been restored at home; employment had been renewed and a long period of prosperity had begun.

When President Warren Harding died in August 1923, newspapers across the United States compared the public outpouring of grief to the national mourning that followed Abraham Lincoln's death 60 years earlier.

Harding was heralded as a kind, compassionate leader who connected easily with the American people. He was credited with steering the U.S. economy back to health, following the global recession after World War I, ushering in an era of peace through the Washington Disarmament Conference treaties, pushing for U.S. participation in a World Court, and helping to avert strikes in the rail and coal industries.

Within months of his death, those accomplishments took a backseat to sensational Congressional hearings involving former Secretary of the Interior Albert Fall and former Veterans Bureau Chief Charles Forbes. The hearings revealed that both men profited financially from backroom dealings while in public office, and both were briefly jailed.

Although Harding had forced the resignation of Forbes and had no knowledge of Fall's "Teapot Dome Scandal," his presidency was tied to the scandals, and his reputation sullied because of wild gossip and innuendo which were treated as facts.

Historians attempting to use Harding's presidential papers for research were turned away by the Harding Memorial Association. The HMA, which owned the papers, was wary of additional sensational and inaccurate books being published.

The Words of Warren G. Harding

In the great fulfillment, we must have a citizenship less concerned about what the government can do for it and more anxious about what it can do for the nation.
U.S. Sen. Harding,
Republican National Convention, 1916

America's greatness, her liberty, and her happiness are founded upon her intelligence. They are founded upon that wide dissemination of knowledge which comes only to the many though our educational system.
U.S. Sen. Harding, 1920

We need a rigid and yet sane economy, combined with fiscal justice, and it must be attended by individual prudence and thrift, which are so essential to this trying hour and reassuring for the future.
President Harding,
Inaugural Speech, March 4, 1921

From Dream to Reality — The Tomb is Built

Following a competition involving the country's leading architects, Henry F. Hornbostel and Eric Fisher Wood of Pittsburgh were awarded the privilege of designing the Harding Tomb. They developed a stately, yet simple design, which honored President Harding's modest wishes to be buried under the open sky.

Groundbreaking for the tomb occurred on April 26, 1926. A collection of records and souvenirs was placed inside the cornerstone. E. Elford and Son of Columbus, Ohio, constructed the tomb, and E.P. Mellon of New York served as professional advisor. The total cost of the tomb, landscaping and grounds was $783,108. The money was privately amassed in a national fundraising effort, including pennies contributed by more than 200,000 children.

Hornbostel's design followed the traditions of Green and Roman architecture. He chose a circular monument constructed of white Georgia marble with a round Greek temple. The exterior colonnade stands entirely free from the circular wall behind it, while the inner columns support two terraces for a hanging garden inside the structure. Two black granite tombstones, surrounded by a bed of ground-covering plants and shaded by a Japanese maple tree, mark the graves of President Harding, left, and Mrs. Harding, right. The tomb includes no elaborate embellishments and no effigy, only an inscription on the inner wall.

The 10-acre site's landscaping is part of the overall design. Rows of trees form the shape of a Latin cross, with the tomb at the intersection of the arms.

Design of the Grounds

The Harding Tomb, gravesite of Warren and Florence Harding, is the centerpiece of a 10-acre design. The tomb sits at the center of the arms of a Latin cross, with the sidewalks and landscaping creating the cross. A committee, along with Mrs. Harding, chose the site. When the site was built in 1926, it was located outside the city of Marion. Wrapped on the east and south sides by a cemetery, the committee attempted to protect the tomb from encroaching development in the future.

Caretakers of the Harding Tomb

The State of Ohio has owned both the Harding Tomb and the Harding Home since 1978, and both properties are managed by the Ohio Historical Society. Since 1990, OHS has completed two major restorations of the tomb.

Prior to state ownership, the properties were owned and operated since 1926 by a private organization, the Harding Memorial Association. The HMA was organized soon after President Harding's death in 1923 to raise funds to build a property gravesite for President Harding. The HMA was comprised of President Calvin Coolidge, members of the Harding cabinet, Marion businessmen, and prominent members of Washington, D.C. society.

President Harding had requested a simple burial under a tree and the open sky, and the Harding Memorial Association was determined to incorporate that request in the tomb design.

A sum of $977,821.76 in private money was raised for the construction of the tomb. More than a million people contributed to the project, with funds coming from across the United States, the Philippines and Europe. More than 200,000 school children also collected pennies for the fund.

Location. 40° 34.404′ N, 83° 7.383′ W. Marker is in Marion, Ohio, in Marion County. Marker can be reached from the intersection of Delaware Avenue (Ohio Route 423) and Vernon Heights Boulevard, on the right when traveling north. Marker is located in Harding Memorial Park near the entrance to the Harding Memorial and Tomb. Touch for map. Marker is in this post office area: Marion OH 43302, United States of America. Touch for directions.

Editor’s want-list for this marker. Photograph with a closer view of the marker structure. • Can you help?
Share This Page.