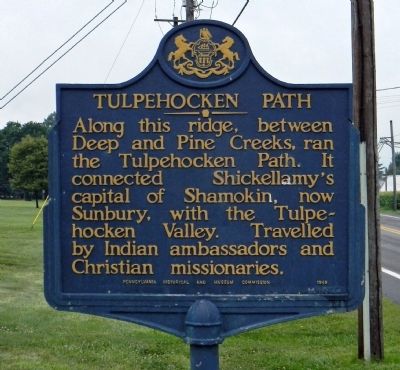 Along this ridge, between Deep and Pine Creeks, ran the Tulpehocken Path. It connected Shickellamy's capital of Shamokin, now Sunbury, with the Tulpehocken Valley. Travelled by Indian ambassadors and Christian missionaries.

Topics and series. This historical marker is listed in this topic list: Native Americans. In addition, it is included in the Pennsylvania Historical and Museum Commission series list.

Location. 40° 38.894′ N, 76° 31.055′ W. Marker is in Hegins, Pennsylvania, in Schuylkill County. Marker is on East Main Street (Pennsylvania Route 25) 0.1 miles east of Division Street, on the right when traveling east. The marker is in front of the Tri-Valley Jr-Sr High School. Touch for map. Marker is at or near this postal address: 155 East Main Street, Hegins PA 17938, United States of America. Touch for directions.

Other nearby markers. At least 8 other markers are within 10 miles of this marker, measured as the crow flies. Les Brown (approx. 3.9 miles away); a different marker also named Tulpehocken Path (approx. 8.9 miles away); 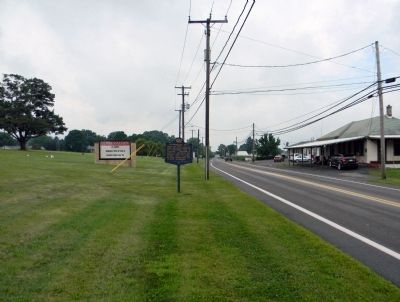