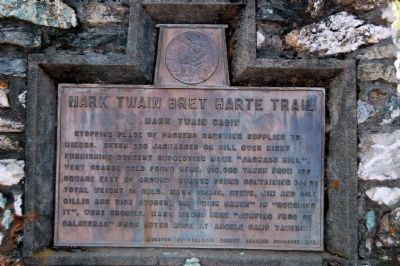 Topics and series. This historical marker is listed in these topic lists: Arts, Letters, Music • Notable Places. In addition, it is included in the Mark Twain Bret Harte Trail series list. 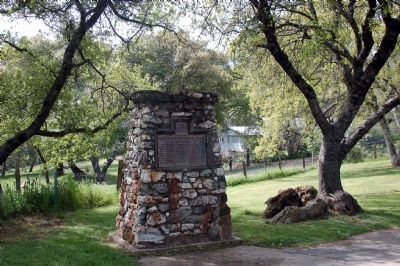 Regarding Mark Twain Cabin. (Text of Rotary Club plaque shown on Photograph No. 5. This plaque can be seen on the white boulder on Photograph 4.) This cabin was first built in 1922 to commemorate the famed author’s presence in Tuolumne County during the winter of 1864–65. Sam Clemens had come over the mountains from Virginia City, Nevada, to San Francisco with his friend Steve Gillis. His various biographers gave different reasons for Clemens coming to Jackass Hill. No matter the reason, Sam Clemens arrived here on December 4, 1864.

Clemens, better known as Mark Twain, stayed with the other two Gillis brothers, Jim and Bill, and Dick Stoker (local pocket miners) until about February 25, 1865. While living on the hill, Sam heard the story of the “Jumping Frog” in an Angels Camp saloon. His version 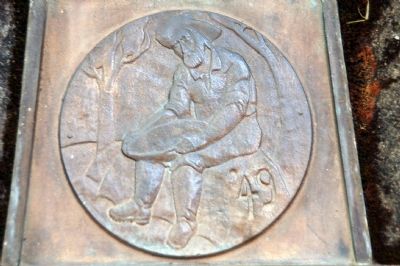 By Karen Key, March 25, 2007
3. Close Up of Marker Artwork
would transform his life. Also some of the tall tales spun by the Gills brothers and Stoker would find their way into Mark Twain’s later writings. That short stay here in the Sierra had quite an impact on American Literature.

Time and the elements took their toll on the first “Mark Twain Cabin,” so the Sonora Sunrise Rotary Club, during 2002-05, restored the cabin as its centennial project, celebrating 100 years of Rotary (1905–2005). This cabin was dedicated on February 23, 2005, the 100th birthday of Rotary International. 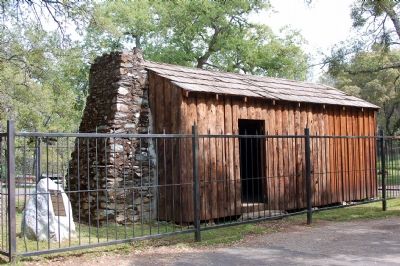 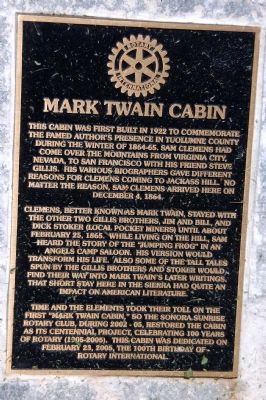 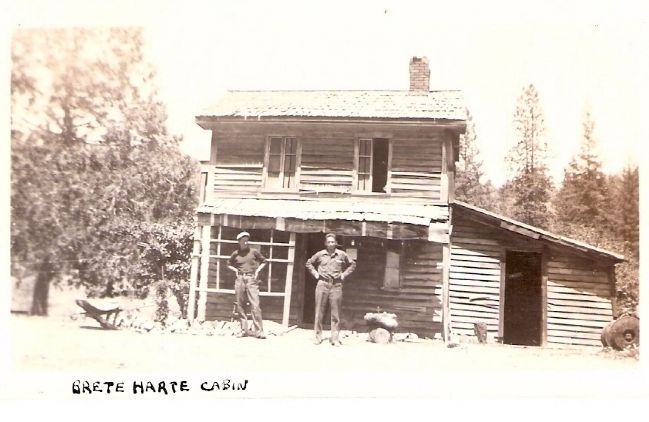 By Joseph Palermo, circa 1933
6. Bret Harte Cabin
Photo taken by Joseph Palermo during his service with the CCC.
This cabin, though not at this site, was located somewhere near the Angels Camp/Sonora Mining towns.
Credits. This page was last revised on November 11, 2020. It was originally submitted on March 31, 2007, by Karen Key of Sacramento, California. This page has been viewed 5,018 times since then and 25 times this year. Last updated on April 3, 2008, by Richard Wisehart of Sonora, California. Photos:   1, 2, 3, 4, 5. submitted on March 31, 2007, by Karen Key of Sacramento, California.   6. submitted on September 11, 2010, by Nicholas Mickells of Omaha, Nebraska. • J. J. Prats was the editor who published this page.

Editor’s want-list for this marker. Actual location of the Bret Harte Cabin seen in photo #6 • Can you help?
Share this page.