400th Anniversary of the Naming of Monterey Bay by Gen. Sebastián Vizcaíno 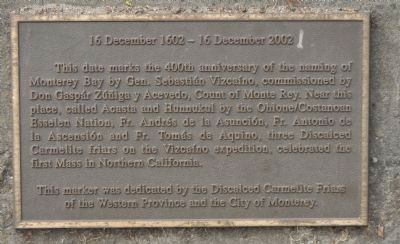 Erected 2002 by Discalced Carmelite Friars of the Western Province and the City of Monterey.

Location. 36° 36.287′ N, 121° 53.656′ W. Marker is in Monterey, California, in Monterey County. Marker can be reached from Monterey Peninsula Recreation Trail, on the right when traveling north. Touch for map. Marker is in this post office area: Monterey CA 93940, United States of America. Touch for directions. 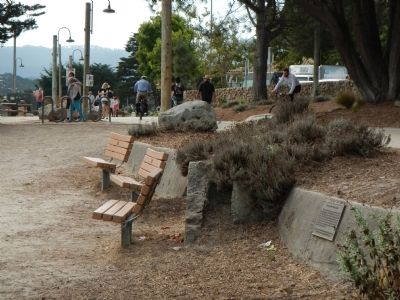 More about this marker. This marker in mounted on a retaining wall behind benches which overlook the Monterey Bay. The overlook is about a block north of Old Fisherman's Wharf on the Monterey Peninsula Recreation Trail. Access is by foot only.

Also see . . .  Sebastian Vizcaíno's Exploration of Monterey in 1602-1603 - Monterey County Historical Society. Sebastian Vizcaíno, leading a fleet consisting of the ships San Diego and Santo Tomás, and the frigate Tres Reyes, sailed past Carmel Bay and on December 16, 1602 rounded Punta de los Pinos (Point Pinos) and entered the harbor. They named the harbor after the viceroy of Mexico, Don Gaspár de Zúñiga y Acevedo, Count of Monte Rey, who had dispatched the expedition. (Submitted on September 12, 2013, by Barry Swackhamer of Brentwood, California.) 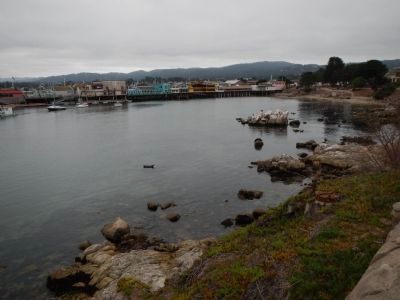