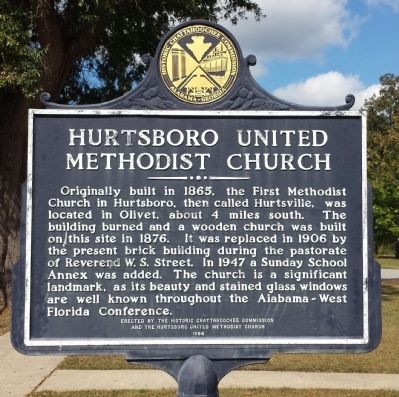 Originally built in 1865, the First Methodist Church in Hurtsboro, then called Hurtsville, was located in Olivet, about 4 miles south. The building burned and a wooden church was built on this site in 1876. It was replaced in 1906 by the present brick building during the pastorate of Reverend W.S. Street. In 1947 a Sunday School Annex was added. The church is a significant landmark, as its beauty and stained glass windows are well known throughout the Alabama-West Florida Conference.

Erected 1994 by The Historic Chattahoochee Commission and the Hurstboro United Methodist Church.

Topics. This historical marker is listed in this topic list: Churches & Religion. A significant historical year for this entry is 1865.

Other nearby markers. At least 8 other markers are within 12 miles of this marker, measured as the crow flies. Long Family (within shouting distance of this marker); Joel Hurt House 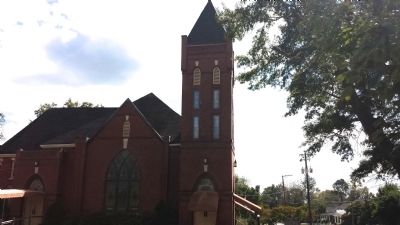