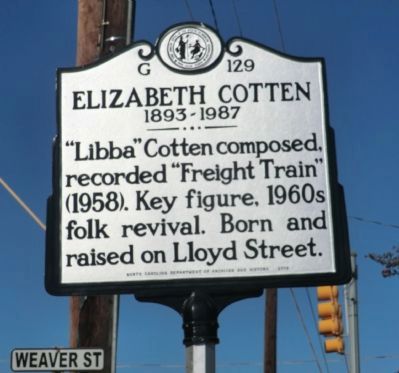 Topics and series. This historical marker is listed in these topic lists: African Americans • Arts, Letters, Music • Entertainment • Women. In addition, it is included in the North Carolina Division of Archives and History series list. A significant historical year for this entry is 1958. 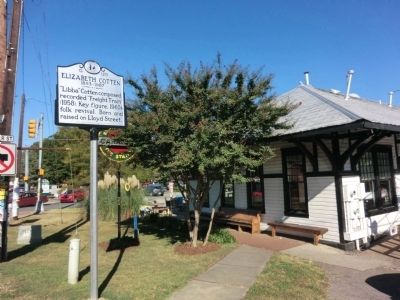 Also see . . .  Elizabeth Cotten on Wikipedia. Cotten was a folk and blues musician who was famous for playing the guitar upside down. Her signature playing style would be known as "cotton picking". Cotten worked mostly as a maid in her early adult years but would finally perform and record music in her 60s after being discovered by Pete Seeger. In the last years of Cotten's life, her work was nominated for major awards, including Grammys. In 2022, she was inducted into the Rock and Roll Hall of Fame as an Early Influence. (Submitted on May 5, 2022, by Jason Voigt of Glen Carbon, Illinois.)
Credits. This page was last revised on May 5, 2022. It was originally submitted on November 4, 2013, by Don Morfe of Baltimore, Maryland. This page has been viewed 783 times since then and 144 times this year. Photos:   1, 2. submitted on November 4, 2013, by Don Morfe of Baltimore, Maryland. • Bernard Fisher was the editor who published this page.
Share this page.