"Home Was Where You Dug it" 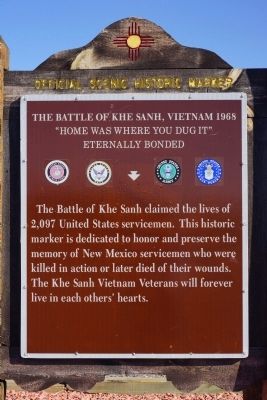 (Side A:)
The Battle of Khe Sanh claimed the lives of 2,097 United States servicemen. This historic marker is dedicated to honor and preserve the memory of New Mexico Servicemen who were killed in action or later died of their wounds. The Khe Sanh Vietnam Veterans will forever live in each others' hearts 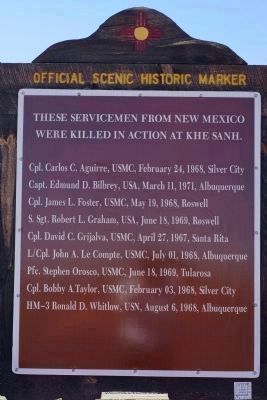 Photographed By Chris English, November 11, 2013
2. These Servicement from New Mexico Were Killed in Action at Khe Sanh

Click or scan to see
this page online
Paraje, New Mexico, in Cibola County. Memorial is on Old Route 66 (State Road 124 at milepost 17), half a mile east of Offramp 107 (Interstate 40). Offramp 107 is at the I-40 Khe Sanh Bridge. Touch for map. Marker is in this post office area: Casa Blanca NM 87007, United States of America. Touch for directions.

Additional commentary.
1. Khe Sanh Bridge and Khe Sanh Historical Marker
I am a Survivor of the Khe Sanh Siege and live in the red and white house just due north of the bridge on top of the hill surrounded by a box canyon. I was instrumental in contacting Ms. Delaney Baros and Mr. Johnny Gallegos, both of whom worked for the New Mexico State Highway Dept. in Milan,NM. We worked together in an effort to get both the Khe Sanh Bridge and the Khe Sanh Historical Marker established. We never took the credit, 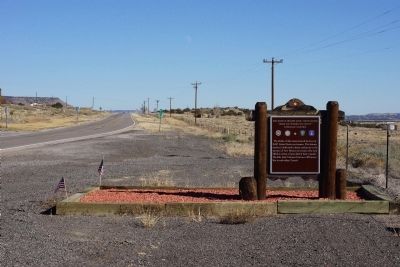 Photographed By Chris English, November 11, 2013
3. View E, The Battle of Khe Sanh Vietnam, 1968 Marker
but as age is catching up, I had to confess. My two grandchildren and I were high above on the mesa overlooking the construction of the new overpass, when the thought of naming this bridge overtook me. I wanted to dedicate it to the many who paid the ultimate price. I also wanted to keep the spirits, memories and stories of the many who served at Khe Sanh. I say this to help with my own PTSB of which I am a 100% disabled. Someday I hope, before I die, that the two state markers become National Markers. Someday I hope to see a flag flying high at the sites. SEMPER FI Note To Editor only visible by Contributor and editor
— Submitted June 4, 2014, by Harold Edward Lockwood of Seama Village, New Mexico. 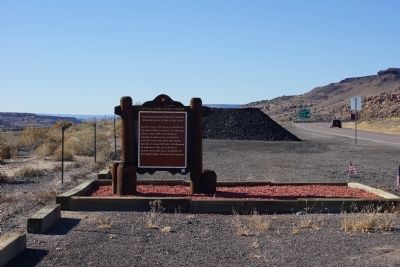 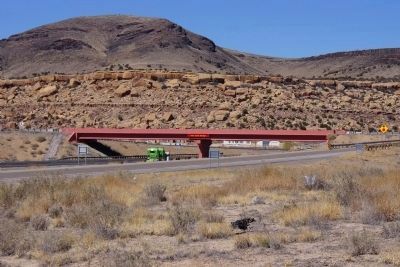