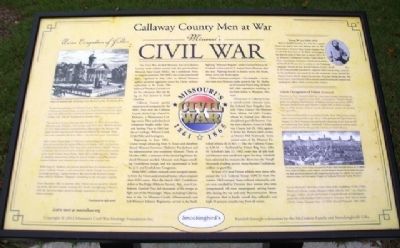 The Civil War divided Missouri, but in Callaway County more soldiers served with the pro-Southern Missouri State Guard (MSG), the Confederate Army or irregular partisans. The MSG was a state-sanctioned force, organized in May 1861 to defend Missouri against potential aggressive action by Union military authorities in St. Louis. This followed President Lincoln's order for volunteers after the firing on Fort Sumter in South Carolina.

Beginning in June 1861, Union troops advancing from St. Louis and elsewhere forced Missouri Governor Claiborne Fox Jackson and his administration into southwest Missouri. There, in October 1861, a remnant of the elected legislature declared Missouri seceded. Missouri soon began enrolling Confederate troops, and was represented in both the U.S. and Confederate Congresses. 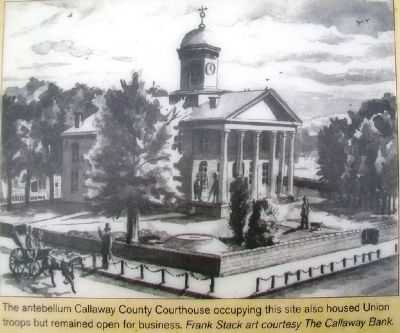 Click or scan to see
this page online
enlisted; some accepted amnestry from the Union and returned home; others retained their MSG status. After the March 1862 Confederate defeat at Pea Ridge (Elkhorn Tavern), Ark., now-Confederate General Price led thousands of his troops to fight east of the Mississippi. Many, including Callaway men in the 1st Missouri Cavalry (Dismounted) and 2nd Missouri Infantry Regiments, served in the hard-fighting "Missouri Brigade" under General Francis M. Cockrell (a five-term U.S. senator from Missouri after the war). Fighting bravely in battles across the South, many never saw home again.

Other volunteers took part - for example - in cavalry raids into Missouri under generals like "Jo" Shelby or in General Price's long, ill-fated fall 1864 expedition resulting in his final defeat at Westport, Missouri. 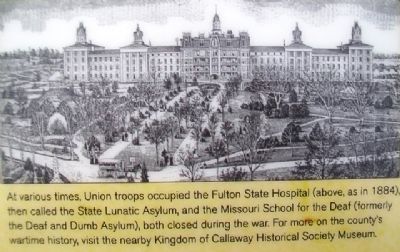 At least 133 local Union soldiers were slaves who joined the U.S. Colored Troops (USCT) from November 1863 onward. Some enlisted voluntarily; others were enrolled by Unionists slave owners who were compensated. All were emancipated, serving honorably during the war and early Reconstruction. About 10 percent died in battle; overall they suffered a high 35 percent casualty rate from all causes.

Union Occupation of Fulton
The governmental seat of Callaway County, Fulton was occupied much of the war by Union troops, contrary to a short-lived non-invasion agreement Col. Jefferson Jones and local volunteers elicited from Union militia Brig. Gen. John B. Henderson in October 1861.

The first brief instance had been after the July 17, 1861, Overton Run skirmish south of Fulton, when troops under Col. John McNeil and then Lt. Col. Adam Hammer entered Fulton. Objecting to the Missouri Telegraph's positive depiction of a Southerner killed in the skirmish, Hammer's men ransacked the news office - the first local press "censorship." 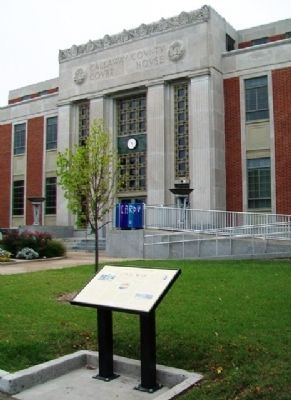 Photographed By William Fischer, Jr., October 12, 2013
4. Callaway County Men at War Marker
law; they were empowered to identify citizens as disloyal, who, if convicted by military tribunals, could be incarcerated at St. Louis's Gratiot Street Prison, Alton (Ill.) or Jefferson City. "Disloyal" property owners were to bear the cost of Union occupation; citizens deemed disloyal were ordered to post bond or take a loyalty oath.

While Isaac D. Snedecor was provost marshal here, his brother James - once a Callaway Guard - was sentenced to death, though not executed, for bridge burning. Captain Snedecor also monitored Southern sympathizer John B. Williams' Telegraph, controlling its ink and paper supplies.

From December 1861 to summer 1862, Fulton was occupied by a battalion of the 3rd Iowa Cavalry. Scouting the "brush" and fighting at Moore's Mill, the 3rd Iowa made a positive enough impression to attract some Fulton enlistees.

The Union hold on Fulton was broken briefly when 180 partisan cavalry under notorious guerrilla Capt. Alvin Cobb galloped through Fulton on August 13, 1862, looting stores and briefly detaining Union men as well as confiscating their horses. Afterwards, Fulton enjoyed an anxious peace, mostly undisturbed by the sporadic violence in rural Callaway.

George W. Law (1828-1873)
Born in Franklin County, Va., Law was a popular farmer and family man near Reform who in 1861 commanded a Missouri State Guard company that served with distinction at the Battle of Lexington. He then led many of these men as captain of Co. B, 1st Missouri Confederate Cavalry, under Elijah P. Gates. Ascending to lieutenant colonel and second in command, he lost an arm in combat in the Vicksburg campaign. Postwar he was elected Callaway County sheriff but in 1873 was mortally wounded by vigilantes while transporting a prisoner. At his deathbed he was joined by his old commander Gates, himself Buchanan County sheriff, despite his own loss of an arm during the war. The heroic Law is remembered with an annual award honoring the county's outstanding law officer. Photo courtesy Isham Holland.

Topics and series. This historical marker is listed in these topic lists: Settlements & Settlers • War, US Civil. In addition, it is included in the Former U.S. Presidents: #16 Abraham Lincoln, and the Missouri’s Civil War series lists. A significant historical month for this entry is March 1862.

Location. 38° 50.836′ N, 91° 56.859′ W. Marker is in Fulton, Missouri, in Callaway County. Marker is on 5th Street near Court Street, on the right when traveling east. Marker is on the north grounds of the county courthouse. Touch for map. Marker is at or near this postal address: 10 East 5th Street, Fulton MO 65251, United States of America. Touch for directions.