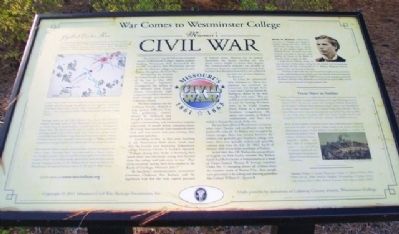 "The Columns" atop this hill are the venerated remains of Westminster College's original academic building, Westminster Hall, destroyed by fire in 1909. Founded in 1851, Westminster was one of the few Missouri colleges to function in some fashion throughout the Civil War.

Anticipating an invasion by Federal troops, at the outset of the war in May 1861 the Missouri legislature reconfigured the militia as the Missouri State Guard. Almost immediately eight companies enrolled volunteers from strongly pro-Southern Callaway County.

According to lore, as they were lunching in old Westminster Hall above, word came that the Guards were mustering. Sympathetic college historian Charles F. Lamkin reported, "Without closing their books or finishing their lunch these two chivalrous 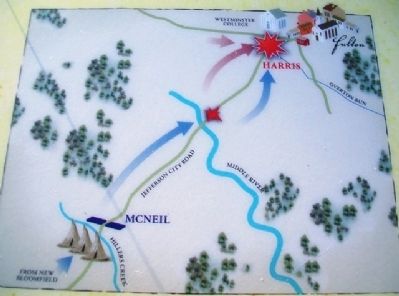 Click or scan to see
this page online
young men hurried from the college and rode away to war." They never returned, tasting their first combat at the Battle of Carthage, Missouri, July 5.

By late-June's commencement, secessionist Governor Claiborne Fox Jackson and the legislature had fled the state capitol pursued by Federal troops. Missouri was in turmoil. Meanwhile the faculty certified the two absent seniors eligible to receive their degrees. The commencement audience was divided in sentiments, however, and Unionists among them bristled when President Samuel S. Laws conferred the last two of nine diplomas "in absentia."

In Latin he announced what translates as "These two diplomas are conferred on Lieutenant [sic] Joseph Scott Laurie and Captain Daniel H. McIntyre, absent in the field crowded with tents." This act and these words were responsible in part for landing President Laws in St. Louis' Gratiot Street Prison as a presumed Southern sympathizer. He spent two months in Federal confinement and then was exiled to Europe for much of the war.

The war later affected Westminster in various other ways. Faculty and enrollment were both drastically reduced. As Fulton was occupied by Union troops, there was tension between the soldiers and generally pro-Southern college and town; there was sporadic militia and guerrilla violence and even the July 28, 1862, battle of Moore's Mill seven miles 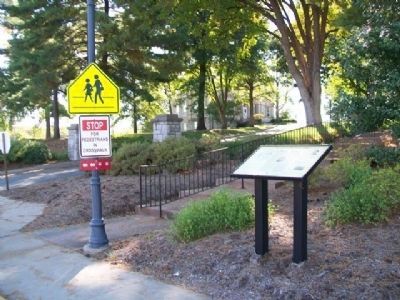 In fall 1863, Rev. J.W. Wallace became professor of English, the fifth faculty member. The Wallace family had fled its home at Independence as a result of Union General Thomas R. Ewing's notorious Order No. 11 sweeping almost all civilians from the counties south of Kansas City; these people were presumed to be aiding and abetting guerrillas like Colonel William C. Quantrill.

Traveling north on the Old Jefferson City Road, the Unionists camped overnight north of New Bloomfield before being ambushed at Middle River by local Southern sympathizers and a contingent of Harris' force. The Southerners hit and ran against the Unionists until reaching a defile at the Overton farm, from which they attacked with a substantial part of Harris' large force and then were routed. At least 15 Home Guards were wounded, three mortally. A Fulton Southern sympathizer, George Nichols, was killed and several others wounded.

Afterward the Home Guards entered Fulton, its first occupation by Union troops. "Overton's Run" was publicized as a Union victory, but Southern attackers were successful in keeping McNeil's force from stopping Harris' cavalry. Reportedly, spent bullets from the fight passed through hanging laundry at the Robnett-Payne house northwest of Westminster; the restored home is now at E. 5th and N. Bluff Streets.

Daniel H. McIntyre (1833-1910)
was born in Callaway and raised in Audrain County. He was a senior at Westminster College when in spring 1861 he was elected captain of the Callaway Guards. Young McIntyre was seriously wounded in the jaw while leading his troops at the Battle of Wilson's Creek, August 10, 1861.

Captured by Federal cavalry, he was interned in Union prison camps for nine months until his exchange and release. He then commanded Co. C, Williams' Regiment Missouri Cavalry, CSA, until the end of the war.

A brilliant student, after the war he read and practiced law, served as a state representative and senator, and was elected Missouri's attorney general (see photo) from 1881-1885. During his final decade, he suffered blindness and then likely dementia as a result of his severe battle wound. He is buried in Elmwood Cemetery, Mexico, Mo.

From Slave to Soldier
North of Westminster is a neighborhood historically African-American since the war, site (for example) of the landmark George Washington Carver School (1937). The area has always had among its residents descendants of 133 former Callaway slaves historian Noel Crowson has identified as serving in eight regiments of U.S. Colored Troops from Missouri. While other Missouri slaves were not emancipated until 1865, these who enrolled for the Union from November 1863 were freed. "Loyal" owners were compensated for their slaves' service; "disloyal" slaveholders were not.

Many of these soldiers served the Union cause with distinction. Callaway men with the 18th U.S. Colored Troops fought at the Battle of Nashville (illustration); at least 13 were killed or mortally wounded in combat. Of the remaining black Union soldiers, 29 died of disease, especially cholera, and four died of unreported causes - an astounding 35 percent total death rate. Fighting for emancipation, all gave the last full measure of devotion.

Topics and series. This historical marker is listed in these topic lists: African Americans • Education • Settlements & Settlers • War, US Civil. In addition, it is included in the Missouri’s Civil War series list. A significant historical month for this entry is May 1861.