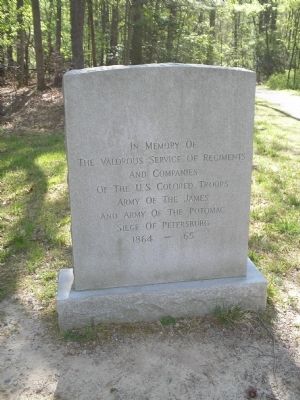 In memory of the valorous service of Regiments and Companies of the U.S. Colored Troops Army of the James and Army of the Potomac Siege of Petersburg 1864 – 65 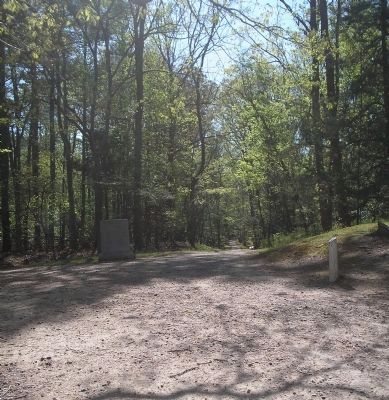 By Bill Coughlin, April 23, 2007
2. U.S. Colored Troops Monument
The monument is at the beginning of the Meade Station Trail.
Park Service. (Submitted on April 13, 2008, by Bill Coughlin of North Arlington, New Jersey.)

2. The Siege of Petersburg. (Submitted on April 13, 2008, by Bill Coughlin of North Arlington, New Jersey.)
3. ...The United States Colored Troops: Infantry Organizations, 36th Through 40th. The US National Archives and Record Administrations compilation of USCT records, with introduction: ...Approximately 179,000 African Americans served in the ranks of the USCT, under nearly 6,000 white officers and 87 black officers. The USCT fought in 39 major engage- ments and over 400 lesser ones. Sixteen African American soldiers received the Medal of Honor as a result of their service during the Civil War. As in other units, the death toll from disease was very high in the USCT. Deaths from disease and battle totaled approximately 37,000. The last regiments of the USCT mustered out of Federal service in December 1867. (Submitted on October 12, 2015.)

Topics. This marker is included in these topic lists: African Americans • War, US Civil 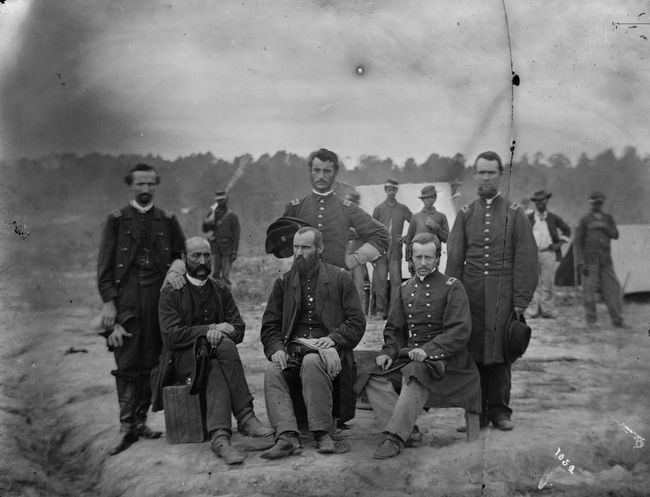 1864
3. Field and staff of 39th U.S. Colored Infantry In front of Petersburg, Va. September 1864.
The 39th United States Colored Infantry was organized at Baltimore, MD, from March 22 to 31, 1864. The regiment was assigned to the 9th Corp of the Army of Potomac and stationed at Manassas Junction, VA, in April 1864. The 39th USCI supported the Army of the Potomac’s overland campaign in Virginia from May to June by guarding the army’s wagon trains. The 39th USCI was transferred to the siege of Petersburg in July 1864, and was heavily engaged at the Battle of the Mine on July 30, 1864. The regiment participated in combat at Weldon Railroad (August 18–21), Poplar Grove Church (September 29–30), and Hatcher’s Run (October 27–28). The 39th USCI participated in the capture of Fort Fisher on January 15, 1865, and the occupation of Wilmington, NC, on February 22. In April 1865, the regiment participated in the capture of Raleigh and was present at the surrender of Joseph Johnston’s army. The 39th USCI remained on duty throughout North Carolina until it mustered out of service on December 4, 1865.
Credits. This page was last revised on June 16, 2016. This page originally submitted on April 13, 2008, by Bill Coughlin of North Arlington, New Jersey. This page has been viewed 1,041 times since then and 7 times this year. Photos:   1, 2. submitted on April 13, 2008, by Bill Coughlin of North Arlington, New Jersey.   3. submitted on October 12, 2015. • Craig Swain was the editor who published this page.
Share This Page.