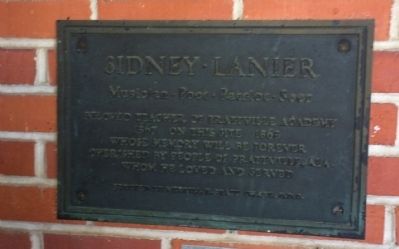 By Mark Hilton, December 17, 2013
1. Sidney Lanier Marker
Inscription.
Sidney Lanier. Musician - Poet - Patriot - Seer.
Beloved teacher of Prattville Academy 1867 . on this site . 1868 whose memory will be forever cherished by people of Prattville, Ala. whom he loved and served. . This historical marker was erected by Merrill E. Pratt Chapt., U.D.C.. It is in Prattville in Autauga County Alabama

Beloved teacher of Prattville Academy
1867 • on this site • 1868
whose memory will be forever
cherished by people of Prattville, Ala.
whom he loved and served

Topics and series. This historical marker is listed in these topic lists: Arts, Letters, Music • Education • Patriots & Patriotism. In addition, it is included in the United Daughters of the Confederacy series list. A significant historical year for this entry is 1867.

Location. 32° 27.799′ N, 86° 28.125′ W. Marker is in Prattville, Alabama, in Autauga County. Marker can be reached from the intersection of Wetumpka Street and South Washington Street, on the right when traveling east. Marker is located at the front entrance to the primary school. Touch for map. Marker is at or near this postal address: 216 Wetumpka Street, Prattville AL 36067, United States of America. Touch for directions.

By Mark Hilton, December 17, 2013
2. Plaque located at entrance to this rebuilt school.

Click or scan to see
this page online
a different marker also named Prattville Dragoons (about 300 feet away); Saint Mark's Episcopal Church (about 400 feet away); Daniel Pratt/First United Methodist Church (approx. 0.2 miles away); First Presbyterian Church of Prattville, Alabama / Original Members (approx. ¼ mile away); Mulbry Grove Cottage (approx. 0.3 miles away); A County Older Than the State, Autauga County (approx. 0.4 miles away). Touch for a list and map of all markers in Prattville. 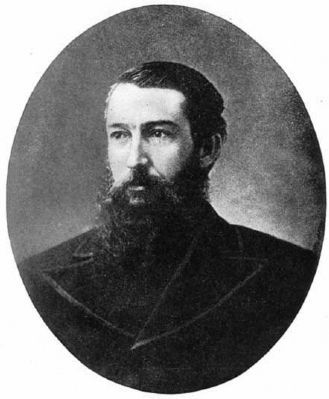