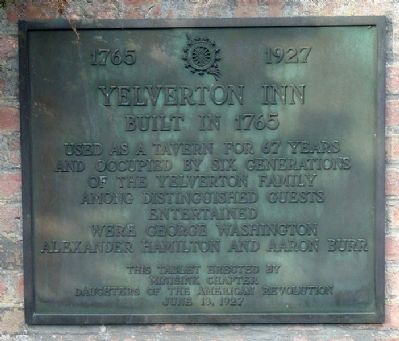 By Clifton Patrick, December 15, 2004
1. Yelverton Inn DAR plaque
Inscription.
Yelverton Inn. . Built in 1765 . . Used as a Tavern for 67 years and occupied by six generations of the Yelverton family. . . Among distinguished guests entertained were George Washington Alexander Hamilton and Aaron Burr . This historical marker was erected in 1927 by Minisink Chapter Daughters of the American Revolution. It is in Chester in Orange County New York

Used as a Tavern for 67 years and occupied by six generations of the Yelverton family.

Erected 1927 by Minisink Chapter Daughters of the American Revolution.

Topics and series. This historical marker is listed in these topic lists: Colonial Era • Industry & Commerce • Patriots & Patriotism. In addition, it is included in the Daughters of the American Revolution series list.

Other nearby markers. At least 8 other markers are within walking distance of this marker. Chester Militia (a few steps from this marker); First Presbyterian Church (within shouting 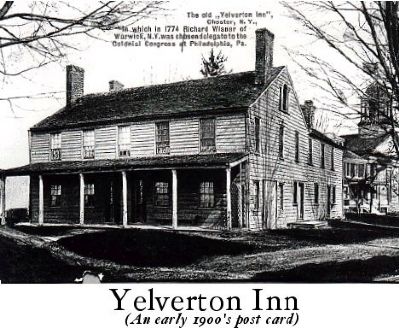 Regarding Yelverton Inn. The immediate area of old Chester was 120 acres owned by John Beers, sold 1751 to James Ensign, then 1755 to John Yelverton. The Inn, first run by John I then his son John II and finally his grandson Abijah, continued until Abijah's death in 1832. George Washington stopped here on his way to join troops on Hudson R., 21 July 1782. The Wawayanda-Cheesecocks Patent trial was held in a barn behind the Inn, 1785, with Alexander Hamilton and Aaron Burr as attorneys for Wawayanda Patentees. Barn now gone. Listed on National Register of Historic Places in 1980 - #80002733. Much has been written about the Yelverton and it is a place of much local pride.