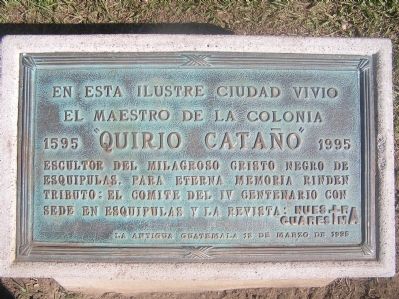 Photographed By J. Makali Bruton, September 1, 2014
1. Sculptor Quirio Cataño Marker
Inscription.
English translation: , In this illustrious city lived the master of the colony 1595 "Quirio Cataño" 1995, Sculptor of the miraculous Black Christ of Esquipulas. To his eternal memory in tribute from: The 400th Anniversary Committee based in Esquipulas and the magazine: Nuestra Cuaresma (Our Lent), La Antigua Guatemala March 12 1995 . This historical marker was erected in 1995. It is in Antigua Guatemala Sacatepéquez Guatemala