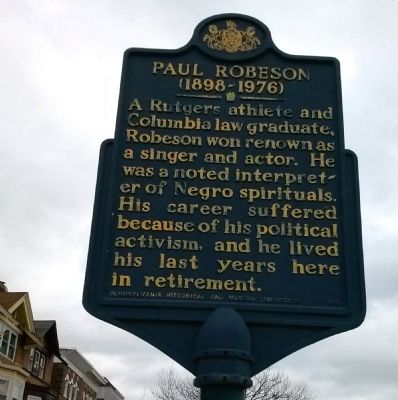 Photographed By Unknown, circa 1994
1. Paul Robeson (1898 - 1976) Marker
Inscription.
Paul Robeson. (1898 – 1976). A Rutgers athlete and Columbia law graduate, Robeson won renown as a singer and actor. He was a noted interpreter of Negro spirituals. His career suffered because of his political activism, and he lived his last years here in retirement. . This historical marker was erected in 1991 by Pennsylvania Historical and Museum Commission. It is in Philadelphia in Philadelphia County Pennsylvania

A Rutgers athlete and Columbia law graduate, Robeson won renown as a singer and actor. He was a noted interpreter of Negro spirituals. His career suffered because of his political activism, and he lived his last years here in retirement.

Topics and series. This historical marker is listed in these topic lists: African Americans • Arts, Letters, Music • Entertainment • Government & Politics. In addition, it is included in the Pennsylvania Historical and Museum Commission series list.

Other nearby markers. At least 8 other markers are within walking distance of this marker. Ruth Plumly Thompson (approx. 0.4 miles away); American Bandstand (approx. half a mile away); World War I Memorial (approx. 0.6 miles away); Rev. Isaac Leeser 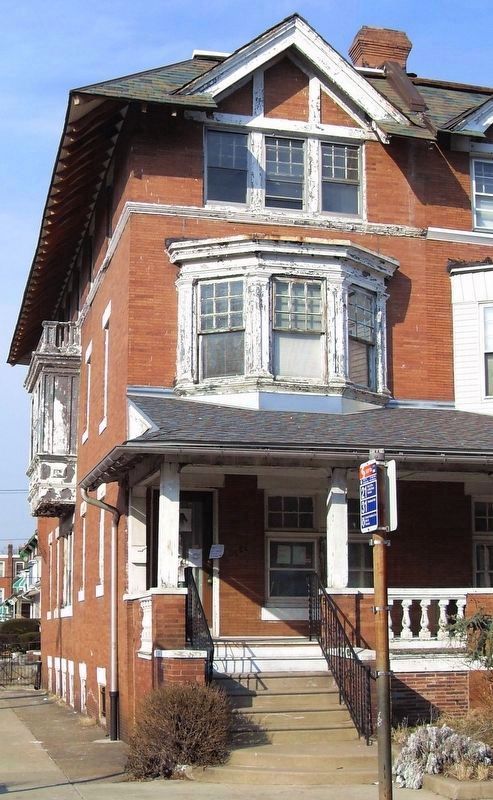 More about this marker. Located in West Philadelphia.

Regarding Paul Robeson. The Robeson House (4951 Walnut Street) is the last home of Paul Robeson, the legendary African-American scholar, athlete, actor, singer and human rights activist. The house has been recognized as National Historic Landmark as well as an African-American historic site and tourist destination of both national and international importance.

Paul Robeson was born in 1898, the son of Reverend William Drew Robeson and Maria Louisa Bustill. Rev. Robeson as a teenager escaped slavery on the Underground Railroad, and later earned a theological degree, and used the pulpit to advocate for equal rights.

Paul Robeson was renowned for his rich baritone voice, superb acting ability, and passionate zeal for racial and human justice. He was a gifted student and athlete while attending Rutgers University in New Jersey. He won honors in debating and oratory and graduated 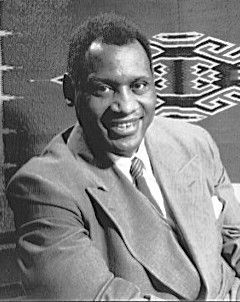 Gordon Parks, via Wikipedia Commons, June 1942
3. Paul Robeson
American actor, athlete, bass-baritone concert singer, writer, civil rights activist, Spingarn Medal winner, and Stalin peace prize laureate. Crop of a photograph in the Farm Security Administration - Office of War Information Photograph Collection at the Library of Congress Prints and Photographs Division.
from Columbia Law School. He left the practice of law to pursue a career in singing and acting. Robeson performed on Broadway, and is noted for his leading roles in Othello and Eugene O'Neill's play, Emperor Jones, and his stunning rendition of the song -Ole Man River- in the musical Showboat.

In 1934, he visited the Soviet Union, where he felt fully accepted as a black artist. During World War II, he entertained troops and sang battle songs on the radio. Despite his war efforts, he was labeled "subversive" by McCarthyites who were wary of his earlier trip to the Soviet Union, his support of the 1947 St. Louis picketing against segregation of black actors, and a Panama effort to organize the mostly-black Panamanian workers.

Robeson received death threats from the Ku Klux Klan while campaigning for the Progressive Party candidate in the 1948 presidential election. In March 1950, NBC barred Robeson from appearing on a television show with Eleanor Roosevelt. Concert halls closed their doors to him, and his records began to disappear from stores. Finally, the U.S. State Department canceled his passport. Robeson sued and the case went to the Supreme Court. After eight years and an international outcry, his passport was returned.

During the 1960s and 1970s, dozens of prominent leaders and world-renown performers visited the classic, 1911 row house in the Walnut 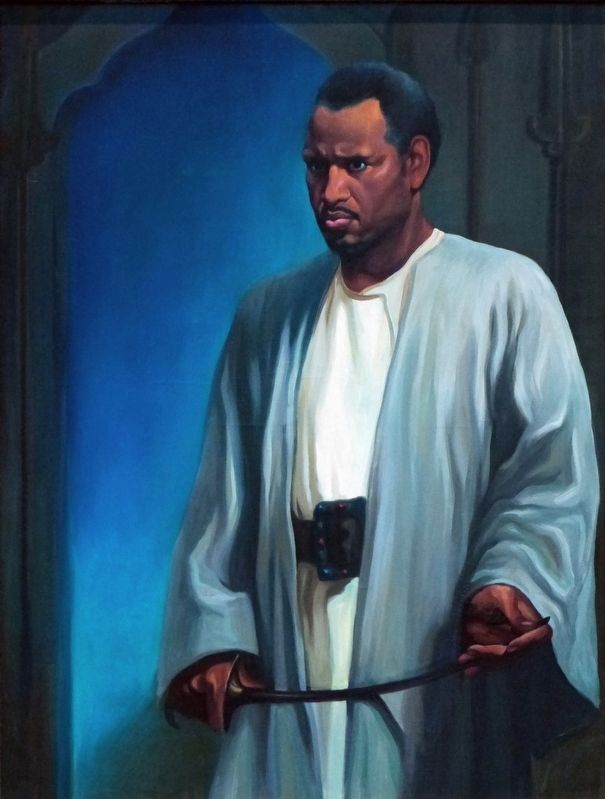 “Paul Robeson's appearance in the title role in The Emperor Jones catapulted him to stardom in 1925, and his popularity soared with a 1930 Othello that ran for nearly three hundred performances. He is perhaps best known for his portrayal of Joe in both the stage and movie versions of Show Boat, singing ‘Ol' Man River.’ He stopped making films in 1942, explaining, ‘The industry is not prepared to permit me to portray the life or express the living interests, hopes, and aspirations of the struggling people from whom I come.’ Robeson's left-wing sentiments became a focal point of anti-Communism in the postwar era, and his passport was revoked in 1950. His American career largely came to an end. With the return of his passport in 1958 after a court battle, he attempted to revitalize his career, but illness and exhaustion led to a life of seclusion during his latter years.” -- National Portrait Gallery
Hill community of West Philadelphia. The Paul Robeson House was his last residence, and during the 10 years that he lived here with his sister, ill and in retirement after nearly two decades of enforced silence and political persecution, both he and his home became powerful symbols of the African-American struggle for equality and civil rights.