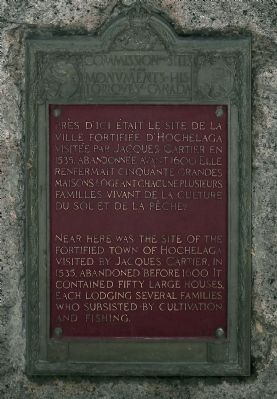 Near here was the site of the fortified town of Hochelaga visited by Jacques Cartier, in 1535, abandoned before 1600. It contained fifty large houses, each lodging several families who subsisted by cultivation and fishing.

Topics and series. This historical marker is listed in these topic lists: Exploration • Native Americans • Settlements & Settlers. In addition, it is included in the Canada, Historic Sites and Monuments Board series list. A significant historical year for this entry is 1535.

Location. 45° 30.216′ N, 73° 34.508′ W. Marker is in Ville-Marie, Québec, in Communauté-Urbaine-de-Montréal. Marker is at the intersection of Rue Sherbrooke Ouest (Québec Route 138) and Avenue McGill College, on the right when traveling 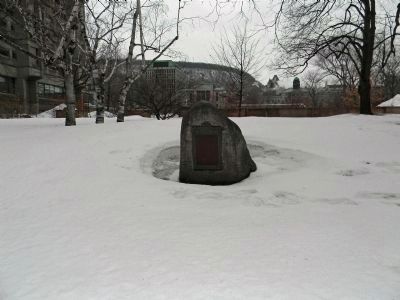 Photographed By PaulwC3, March 29, 2014
2. Wide view of the Hochelaga Marker
Located on the McGill University campus with Mont Royal standing in the background.

Click or scan to see
this page online
south on Rue Sherbrooke Ouest. The marker is located on the McGill University campus, just south of the Roddick Gates. Touch for map. Marker is at or near this postal address: 845 Rue Sherbrooke O, Ville-Marie QC H3A 0G4, Canada. Touch for directions.