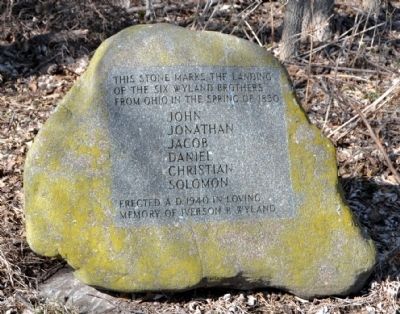 Photographed By Duane Hall, March 31, 2014
1. Wyland Brothers Landing Marker
Inscription.
Wyland Brothers Landing. . This stone marks the landing of the six Wyland brothers from Ohio in the spring of 1830 , , John , Jonathan , Jacob , Daniel , Christian , Solomon , , Erected A.D. 1940 in loving memory of Iverson P. Wyland . This historical marker was erected in 1940. It is Near New Paris in Elkhart County Indiana

Topics. This historical marker is listed in these topic lists: Industry & Commerce • Settlements & Settlers. A significant historical year for this entry is 1830.

Location. 41° 31.039′ N, 85° 49.034′ W. Marker is near New Paris, Indiana, in Elkhart County. Marker can be reached from the intersection of County Road 42 and County Road 29, on the left when traveling north. Marker is located in Baintertown Park, part of the River Preserve County Park. Touch for map. Marker is at or near this postal address: 67380 County Road 29, New Paris IN 46553, United States of America. Touch for directions.

Other nearby markers. At least 8 other markers are within 3 miles of this marker, measured as the crow flies. Five Medals Village (within shouting distance of this marker); New Paris World War II Memorial (approx. 1.3 miles away); Waterford Elementary School (approx. 1.9 miles away); Site Of The First School House In Elkhart County 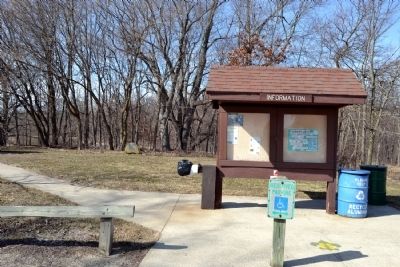 Regarding Wyland Brothers Landing. From the Elkhart County Parks and Recreation website:

"In 1830, Jonathan Wyland and five of his brothers came to Elkhart County from Ohio. The brothers entered 640 acres of land and built a mill race and a saw mill. The area soon became known as Wyland Mills as they expanded their milling operations to include a four story grist mill in 1835 and a woolens mill in 1840. After the death of his wife, Johnathan Wyland sold his holdings to Fredrick Bainter in 1860. The area was re-christened Baintertown but was never plotted or recorded. In 1898 William Redden purchased the original Wyland Mill, homestead and land. The mill continued to operate until 1923 when it could no longer compete against national brands.

The Interstate Public Service Company bought the farm from the Redden family and built the Baintertown Hydroelectric plant. 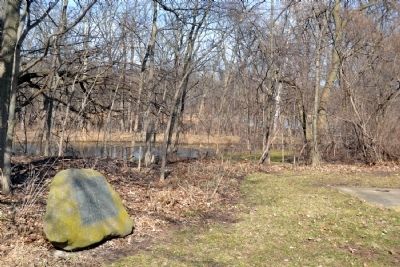