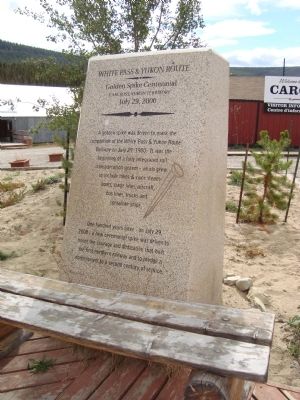 One hundred years later – on July 29, 2000 a new ceremonial spike was driven to honor the courage and dedication that built the first northern railway and to pledge a commitment to a second century of service. . This historical marker was erected in 2000 by Carcross, Yukon Territory, July 29. It is in Carcross Yukon

The golden spike was driven to mark the completion of the White Pass & Yukon Route Railway on July 29, 1900. It was the beginning of a fully integrated rail transportation system – which grew to include lakes & river steamboats, stage lines, aircraft, bus lines, trucks and container ships.

One hundred years later – on July 29, 2000 a new ceremonial spike was driven to honor the courage and dedication that built the first northern railway and to pledge a commitment to a second century of service.

Other nearby markers. At least 3 other markers are within walking distance of this marker. A different marker also named White Pass & Yukon Route (a few steps from this marker); James “Skookum” Jim Mason 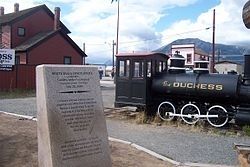 Regarding White Pass & Yukon Route. Carcross — The Tagish people call this area Todezzane, “blowing all the time”and the Tlingit called call it Naataase Heen, “water running through the narrows”. In 1899, the community was officially named Caribou Crossing, referring to the spot where the local woodland caribou herd crossed the narrows. Bishop Bompass requested Caribou Crossing be renamed "Carcross" in 1904, and the government approved the change in 1906.
J.H. Brownlee surveyed the town site in 1899 for the White Pass & Yukon Route (WP&YR)... The town was established by WP&YR to maintain the rail line and connect freight and passengers to Atlin and points around the lake via the sternwheelers.

Also see . . .
1. Carcross, Yukon Territory - Wikipedia. (Submitted on November 10, 2011, by Barry Swackhamer of Brentwood, California.)
2. White Pass & Yukon Route – Wikipedia Entry. “The line was born of the Klondike Gold Rush of 1897. The most popular route taken by prospectors to the gold fields in Dawson City was a treacherous route 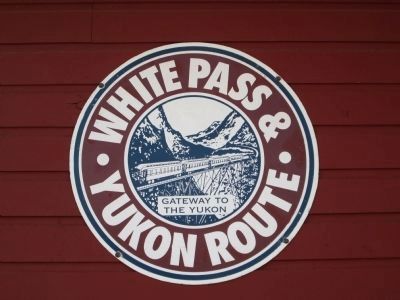 By Rev. Ronald Irick, July 16, 2013
3. White Pass & Yukon Route Marker
Railroad Logo on side of shop building
from the port in Skagway or Dyea, Alaska, across the mountains to the Canadian border at the summit of the Chilkoot Pass or the White Pass. There, the prospectors were not allowed across by Canadian authorities unless they had one ton of supplies. This usually required several trips across the passes. There was a need for better transportation than pack horses used over the White Pass or human portage over the Chilkoot Pass.” (Submitted on August 11, 2012.) 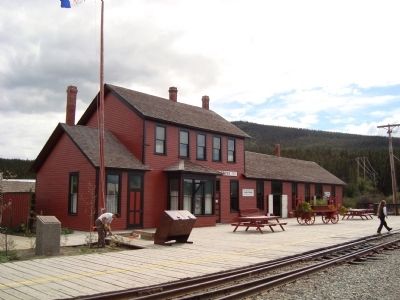 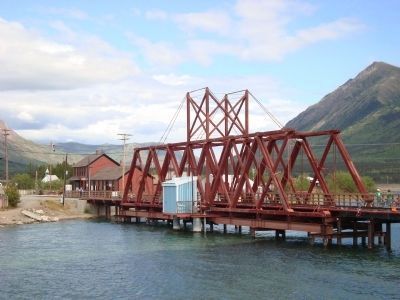 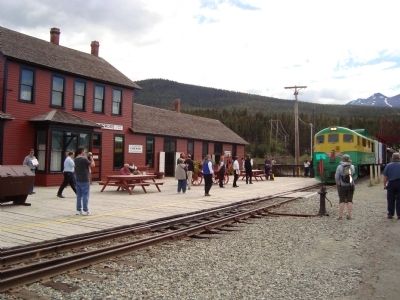