A Desert and Riperian and Wetland Area 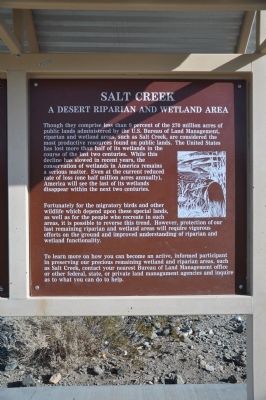 Though they comprise less than 9 percent of the 270 million acres of public lands administered by the U.S. Bureau of Land Management, riparian and wetland areas, such as Salt Creek, are considered the most productive resources found on public lands. The United States has lost more than half of its wetlands in the course of the last two centuries. While this decline has slowed in recent years, the conservation of wetlands in America remains a serious matter. Even at the current reduced rate of loss (one half million acres annually), America will see the last of its wetlands disappear within the next two centuries.

Fortunately for the migratory birds and other wildlife which depend upon these special lands, as well as for the people who recreate in such areas, it is possible to reverse this trend. However, protection of our last remaining riparian and wetland areas will require vigorous efforts on the ground and improved understanding of riparian and wetland functionality.

To learn more on how you can become an active, informed participant in preserving our precious remaining wetland and riparian areas, such as Salt Creek, 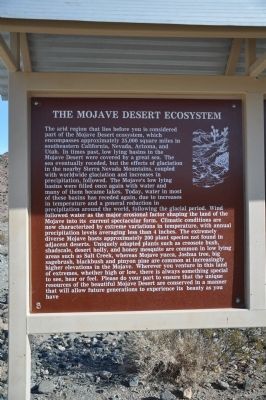 Click or scan to see
this page online
contact your nearest Bureau of Land Management office or other federal, state, or private land management agencies and inquire as to what you can do to help.

The Mojave Desert Ecosystem
The arid region that lies before you is considered part of the Mojave Desert ecosystem, which encompasses approximately 25,000 square miles in southeastern California, Nevada, Arizona, and Utah. In times past, low lying basins in the Mojave Desert were covered by a great sea. The sea eventually receded, but the effects of the glaciation in the nearby Sierra Nevada Mountains, coupled with worldwide glaciation and increases in precipitation, followed. The Mojave's low lying basins were filled once again with water and many of them became lakes. Today, water in most of these basins has receded again, due to increases in temperature and a general reduction in precipitation around the world, following the glacial period. Wind followed water as the major erosional factor shaping the land of the Mojave into its current spectacular form. Climatic conditions are now characterized by extreme variations in temperature, with annual precipitation levels averaging less than 4 inches. The extremely diverse Mojave hosts approximately 200 plant species not found in adjacent deserts. Uniquely adapted plants such as creosote bush, shadscale, desert holly, and honey mesquite are common in low 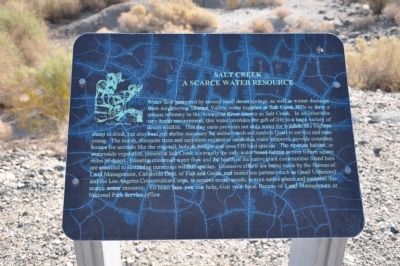 Photographed By Michael Kindig, October 10, 2009
3. Salt Creek: A Scarce Water Resource
lying areas such as Salt Creek, whereas Mojave yucca, Joshua tree, big sagebrush, blackbush and pinyon pine are common at increasingly higher elevations in the Mojave. Wherever you venture in this land of extremes, whether high or low, there is always something special to see, hear or feel. Please do your part to ensure that the unique resources of the beautiful Mojave Desert are conserved in a manner that will allow future generations to experience its beauty as you have.

Salt Creek: A Scarce Water Resource
Water flow generated by several small desert springs, as well as winter drainage from neighboring Silurian Valley, come together at Salt Creek Hills to form a unique tributary to the Amargosa River known as Salt Creek. In an otherwise very harsh environment, this water provides the gift of life to a huge variety of desert wildlife. This tiny oasis provides not only water for wildlife like bighorn sheep to drink, but also food and shelter necessary for animals such as Gambels Quail to survive and raise young. The marsh, mesquite trees and succulent vegetative scrub this water supports, provide countless homes for animals like the ring-tail, bobcat, badger and over 150 bird species. The riparian habitat, or streamside vegetation, present at Salt Creek is virtually the only water based habitat in over fifteen square miles of desert. Ensuring continued water 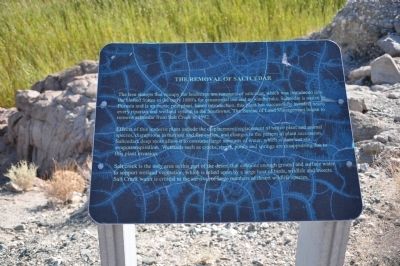 Photographed By Michael Kindig, October 10, 2009
4. The Removal of Saltcedar
flow and the health of the native plant communities found here are essential to sustaining numerous wildlife species. Extensive efforts are being made by the Bureau of Land Management, California Dept. of Fish and Game, and numerous partners such as Quail Unlimited and the Los Angeles Conservation Corps, to remove exotic weeds, restore native plants and maintain this scarce water resource. To learn how you can help, visit your local Bureau of Land Management or National Park Service office.

The Removal of Saltcedar
The tree stumps that occupy the landscape are remnants of saltcedar, which was introduced into the United States in the early 1800's for ornamental use and as windbreaks. Saltcedar is native to Eurasia and is an exotic pest plant. Since introduction, this plant has successfully invaded nearly every riparian and wetland system in the Southwest. The Bureau of Land Management began to remove saltcedar from Salt Creek in 1992.

Effects of this invasive plant include the displacement/replacement of native plant and animal species, disruptions in nutrient and fire cycles, and changes in the pattern of plant succession. Saltcedars deep roots allow it to consume large amounts of water, which is then lost via evapotranspiration. Wetlands such as creeks, rivers, ponds, and springs are disappearing due to this plant invasion. 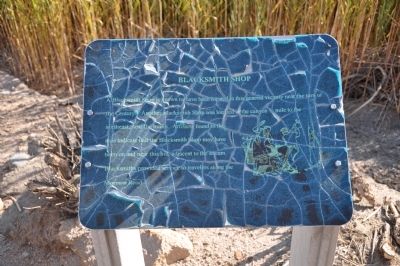 Photographed By Michael Kindig, October 10, 2009
5. Blacksmith Shop
is the only area in this part of the desert that contains enough ground and surface water to support wetland vegetation, which is relied upon by a large host of birds, wildlife and insects. Salt Creek water is critical to the survival of large numbers of desert wildlife species.

Salt Creek-A Unique Desert Oasis for Wading Birds
Desert wetland and riparian areas, such as Salt Creek, constitute one of the most important resources on lands managed by the Bureau of Land Management. Salt Creek functions as a desert oasis, providing food, shelter, and water for a wide variety of wildlife. However, migrating wading birds appear particularly attracted to the wetland and riparian resources found at Salt Creek. These large, often cryptic-colored birds, move very slowly and deliberately in their preferred wetland habitats, stalking small insects, fish and amphibians. Take some time, be still, and looks closely; you may be fortunate enough to spot a great 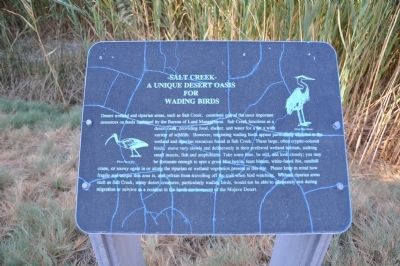 Photographed By Michael Kindig, October 10, 2009
6. Salt Creek-A Unique Desert Oasis for Wading Birds
blue heron, least bittern, white-faced ibis, sandhill crane, or snowy egret in or along the riparian or wetland vegetation present at this site. Please keep in mind how fragile and unique this area is, and refrain from travelling off the trail when bird watching. Without riparian areas such as Salt Creek, many desert creatures, particularly wading birds, would not be able to adequately rest during migration or survive as a resident in the harsh environment of the Mojave Desert.

Under the Athel Trees
This grove of athel trees was preserved because of the haven it provides for desert wildlife. As you enjoy the shade and cool breeze imagine you are a owl or other large bird seeking respite from the unrelenting sun. As you glide into the shadows, the relief and comfort provided by these sturdy trees brings joy to your heart. Here protected by the athels is a place to roost, rest and, in nearby Salt Creek, quench your thirst and find a meal.

In past years owls have roosted, mated and nested in this small grove. Long-eared owls, great horned owls and many other birds and wildlife use areas like these, near wetlands and desert streams, to hide from predators, gain shelter from the harsh desert climate and raise families.

The athel tree is not native to North America, originating in the Middle East, it was first brought to the Mojave Desert 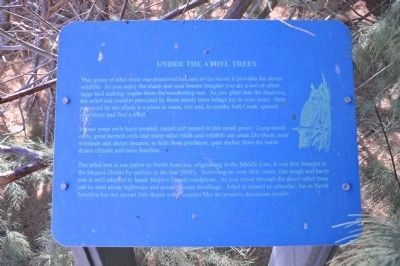 Photographed By Michael Kindig, October 10, 2009
7. Under the Athel Trees
by settlers in the late 1800's. Surviving on very little water, this tough and hardy tree is well adapted to harsh Mojave Desert conditions. As you travel through the desert athel trees can be seen along highways and around desert dwellings. Athel is related to saltcedar, but ni North America has not spread into desert water courses like its invasive deciduous cousin.

Topics. This historical marker is listed in these topic lists: Environment • Natural Resources. A significant historical year for this entry is 1992. 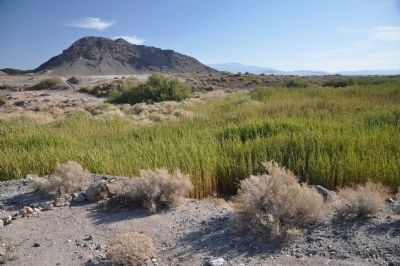 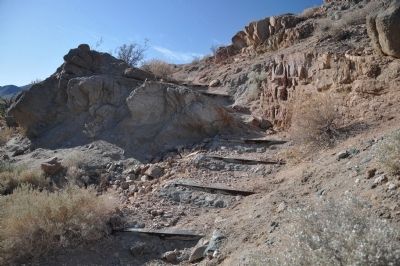 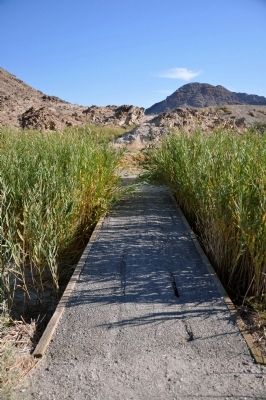 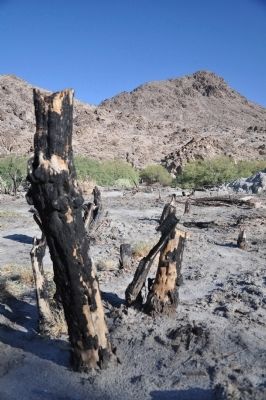 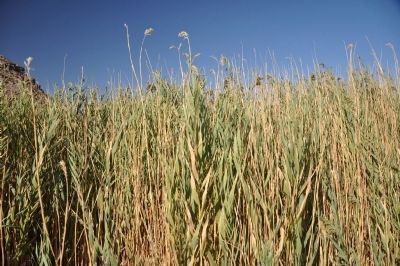