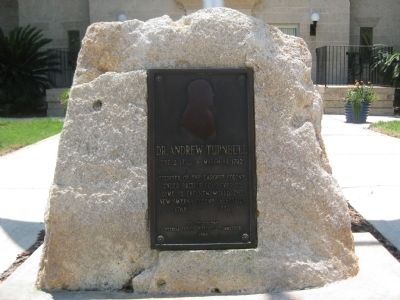 Photographed By Glenn Sheffield, June 3, 2012
1. Dr. Andrew Turnbull Marker
Inscription.
Dr. Andrew Turnbull. Dec. 2, 1720 - March 13, 1792. Founder of the largest colony under British rule ever to come to the New World. The New Smyrna Colony of Florida
1768 - 1778. . This historical marker was erected in 1968 by the Volusia County Historical Commission. It is in New Smyrna Beach in Volusia County Florida

Founder of the largest colony under British rule ever to come to the New World. The New Smyrna Colony of Florida
1768 - 1778

Topics. This historical marker is listed in these topic lists: Colonial Era • Settlements & Settlers. A significant historical year for this entry is 1768. 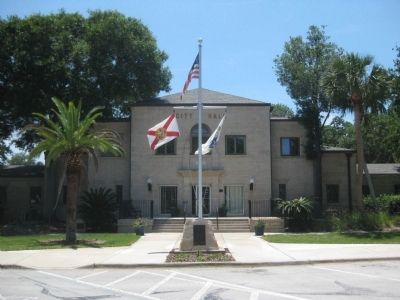 More about this marker. The marker is a rectangular metal plaque mounted on a rock. It sits below a flag pole and faces away from City Hall toward the street. Across the top of the plaque is a cameo outlining a man's profile. The marker sits within the nationally designated New Smyrna Beach Historic District.

Regarding Dr. Andrew Turnbull. Born in Scotland, Dr. Andrew Turnbull was a physician and British diplomat who was granted lands in the newly British territory of East Florida. He sailed there with with 1200 - 1400 Greek, Corsican, Minorcan, Italian, and other immigrants to establish the 101,400 acre colony of New Smyrna (named for Smyrna in Asia Minor, birthplace of Turnbull's Greek wife). The colony successfully cultivated sugarcane, indigo, and hemp, but suffered significant losses resulting from disease and discord with their Native American neighbors. Increasing dissension among the remaining colonists finally brought about the colony's collapse, and the settlers retreated north to St. Augustine. Florida later reverted to Spanish authority and Turnbull retired to South Carolina.

2. Smyrnea: Dr. Andrew Turnbull and the Mediterranean Settlement at New Smyrna and Edgewater, Florida,. (Submitted on July 1, 2014, by Glenn Sheffield of Tampa, Florida.) 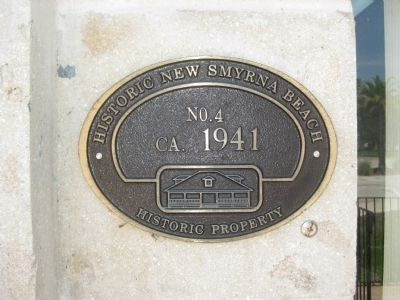