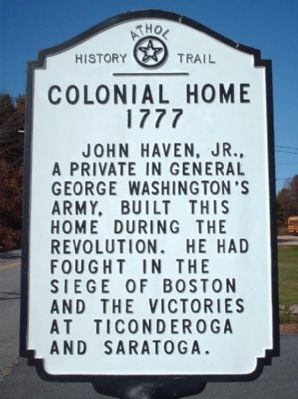 Photographed By Larry Wilson, October 7, 2006
1. Colonial Home 1777 Marker
Inscription.
Colonial Home 1777 - John Haven, Jr., a private in General George Washington's army, built this home during the revolution. He had fought in the siege of Boston and the victories at Ticonderoga and Saratoga . This historical marker was erected by Athol Hiistorical Society. It is in Athol in Worcester County Massachusetts

Colonial Home 1777 - John Haven, Jr., a private in General George Washington's army, built this home during the revolution. He had fought in the siege of Boston and the victories at Ticonderoga and Saratoga

Topics. This historical marker is listed in these topic lists: Colonial Era • Patriots & Patriotism • War, US Revolutionary. A significant historical year for this entry is 1777.

Location. 42° 36.831′ N, 72° 12.331′ W. Marker is in Athol, Massachusetts, in Worcester County. Marker is on Chestnut Hill Avenue, on the right when traveling north. Touch for map. Marker is in this post office area: Athol MA 01331, United States of America. Touch for directions. 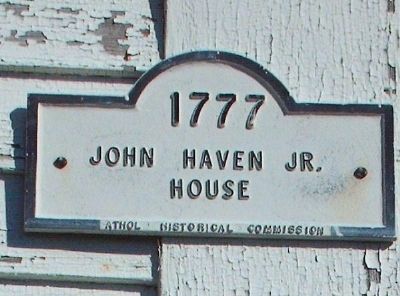 Regarding Colonial Home 1777. "The Havens of Massachusetts are descended from one Richard Haven, who came from England and settled in Framingham. His grandson, John Haven, came from Framingham to Athol about 1760, and was one of the first settlers of Chestnut Hill. He was one of the most prominent men in town, having been one of the first board of Selectmen, was the first Town Clerk, the first Representative to the Great and General Court, and was chosen deacon of the old First Church, Nov. 10, 1774, which office he probably held until his death, July 12, 1807, at the age of eighty-one years. He had two sons, John Haven, Jr., and Daniel. John Haven, Jr., was in the Revolution, and on his return in 1777, built the house now standing on the Josiah Haven farm. He had six boys and five girls, all of whom grew up to manhood and womanhood. The boys were, Levi, John, Asa, Samuel, Chauncey and Jotham." Athol, Massachusetts, Past and Present by Lilley Brewer Caswell, Athol, Mass 1889. p. 274 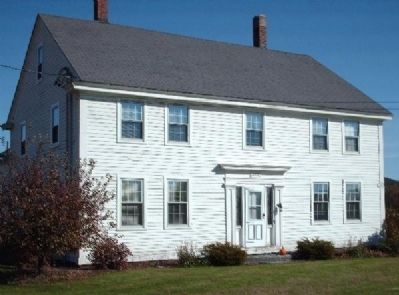