The Boy's Brigade in Malaysia 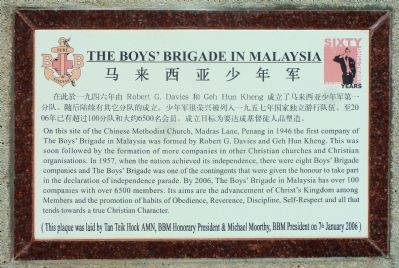 On this site of the Chinese Methodist Church, Madras Lane, Penang in 1946 the first company of The Boy's Brigade in Malaysia was formed by Robert G. Davies and Geh Hun Kheng. This was soon followed by the formation of more companies in other Christian churches and Christian organizations. In 1957, when the nation achieved its independence, there were eight Boy's Brigade companies and The Boy's Brigade was one of the contingents that were given the honour to take part in the declaration of independence parade. By 2006, The Boy's Brigade in Malaysia has over 100 companies with over 6500 members. Its aims are the advancement of Christ's Kingdom among Members and promotion of habits of Obedience, Reverence, Discipline, Self-Respect and all that tends towards a true Chinese Character. (This plaque was laid by Tan Teik Hock AMN, BBM Honorary President & Michael Moorthy, BBM President on 7th January 2006)

Erected 2006 by The Boy's Brigade in Malaysia.

Topics. This historical marker is listed in this topic list: Churches & Religion. A significant historical date for this entry is January 7, 2006. 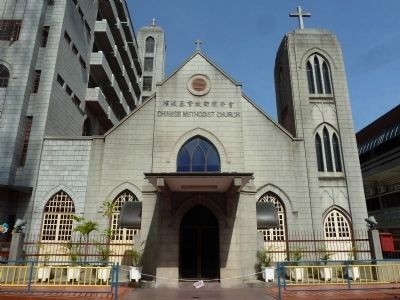 Regarding The Boy's Brigade in Malaysia. From Penang, Penang lang lah...... by Boon Raymond:

Dr. West and Mr. Lau Seng Chong on May 5, 1895 to start work among the Hokkien speaking Chinese of Penang as the "Gospel Light (which began) to shine upon this particular group of people who afterwards called themselves Methodists".

These pioneers rented and old shop house at 29 Galdestone Road. Records show that they did not confine themselves to the preaching of the Gospel alone; they branched out into dispensary work, Sunday school work and even started a Chinese school - all within an incredibly short period of 3 months.

The faithful and energetic efforts of these pioneers and their successors contributed to the growth of the Church both numerically and spiritually during the next forty years. The period saw the birth of the Epworth League and the Ladies Aid Society. Both groups together with the 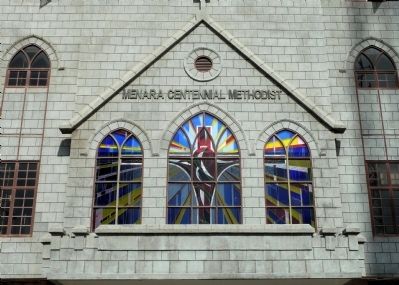 By Larry Wilson, February 15, 2013
3. Penang Chinese Methodist Church
Sunday School and other Church programmes resulted in increased membership and attendance. The pressure of space necessitated the Church to move twice each time to a larger building before the congregation finally moved into the present building in Madras Lane in 1937.

The new building was indeed the fruit of the vision, faithfulness and dedication of the pastors, church workers and members before 1937. 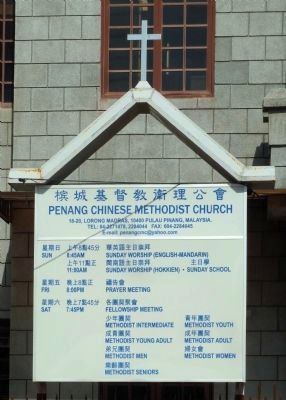 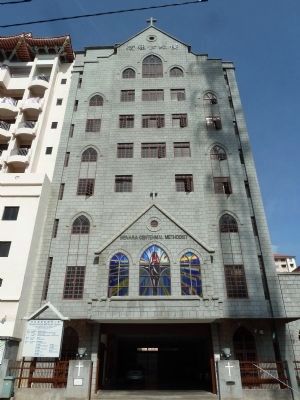