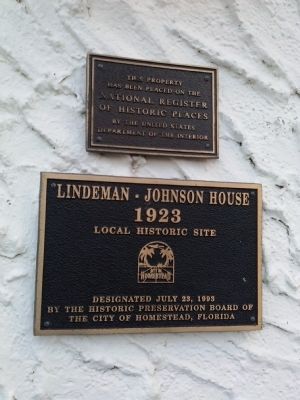 Photographed By Marsha A. Matson, April 27, 2014
1. Lindeman-Johnson House Marker
Inscription.
Lindeman-Johnson House.
This property has been placed on the National Register of Historic Places by the United States Department of the Interior. . This landmark was erected in 1993 by U.S. Dept. of the Interior and The Historic Preservation Board of the City of Homestead, Florida. It is in Homestead in Miami-Dade County Florida

Erected 1993 by U.S. Dept. of the Interior & The Historic Preservation Board of the City of Homestead, Florida. 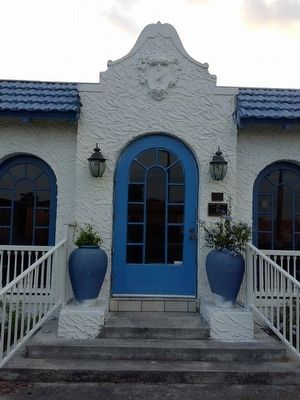 Regarding Lindeman-Johnson House. Mr. F. H. "Doc" Lindeman, a Homestead pharmacist, decided to construct a concrete and stucco residence for his family in 1923. Noted Miami architect, H. George Fink, Sr. was hired to prepare the actual design. Mr. Fink, cousin of Coral Gables developer George E. Merrick, is credited with designing most of the Gables' original buildings. The house is noteworthy for its Mediterranean details, Ludovicci tiles, and is a fine example of masonry vernacular in Miami-Dade County. Mr. Howard Johnson worked for Mr. Lindemann as a pharmacist, eventually owning Dixie Drug Store in 1928 and by 1938 he and his wife moved into the house at 906 N. Krome Avenue. Homestead Then and Now (Self-guided walking tour of historic Homestead) 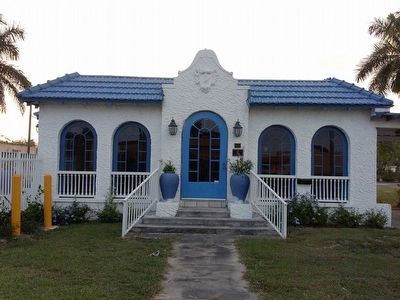