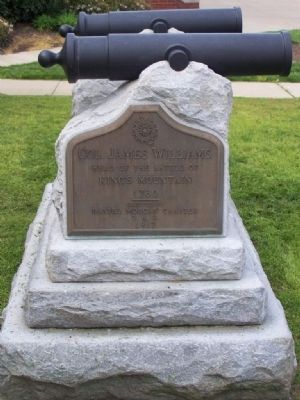 Topics and series. This historical marker is listed in this topic list: War, US Revolutionary. In addition, it is included in the Daughters of the American Revolution (DAR) series list. A significant historical year for this entry is 1780. 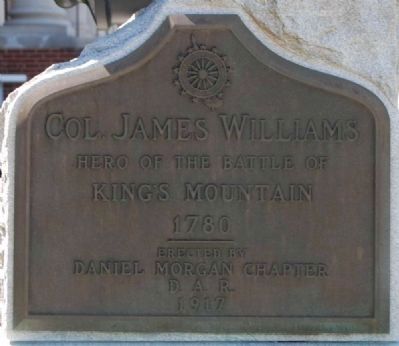 Also see . . .
1. The Battle of King's Mountain ...by C. Hammett, Coordinator Tennesseans in the Revolutionary War. King's Mountain is unique in America's history: This battle—fought by 1,000 plus militiamen—without orders, formal military training, uniforms or provisions, and with no promise of pay—against the supposedly “superior forces” (Submitted on April 25, 2008, by Mike Stroud of Bluffton, South Carolina.)

3. Wikipedia entry for Col. James Williams. Williams led a 100 man detachment from his regiment to meet other militia detachments in pursuit of Cornwallis' western force. (Submitted on April 25, 2008, by Mike Stroud of Bluffton, South Carolina.) 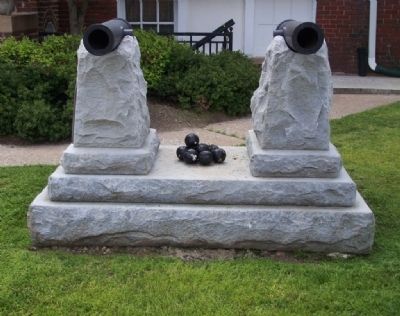 Photographed By Mike Stroud, 2008
3. Col. James Williams Marker
1. The battle of Kings Mountain
...Opened on October 7, 1780, when 900 frontiersmen (including John Crockett, the father of Davy Crockett), approached the steep base of King's Mountain at dawn. The rebels formed eight groups of 100 to 200 men. Two parties, led by Colonels John Sevier and William Campbell, assaulted the 'high heel' of the wooded mountain, the smallest area but highest point, while the other seven groups, led by Colonels Shelby, Williams, Lacey, Cleveland, Hambright, Winston and McDowell attacked the main Loyalist position by surrounding the 'ball' base beside the 'heel' crest of the mountain.

The frontiersmen crept up the hill and fired on the scarlet-clad Loyalists from behind rocks and trees. Ferguson rallied his troops and launched a bayonet charge against Campbell and Sevier's men. With no bayonets of their own, the rebels retreated down the hill and into the woods. But Campbell rallied his troops, returned to the base of the hill, and resumed firing. Two more times, Ferguson launched bayonet attacks. During one of the charges, Colonel Williams was killed and Colonel McDowell wounded. But after each charge, the frontiersmen returned to the base of the hill and resumed shooting. It was hard for the Loyalists to find a target because the frontiersmen were constantly moving using cover and concealment similar to training 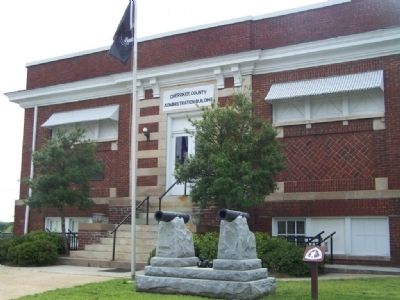 After several hours of combat, Loyalist casualties were heavy. Ferguson rode back and forth across the hill, blowing a silver whistle he used to signal charges. Growing desperate, he slipped on a plaid shirt to cover his officer's coat. A soldier saw this and alerted his comrades immediately. At the crest, as the frontiersmen overran the Loyalist position, and Ferguson fell dead from his saddle with eight rifle balls in his body.

Seeing their leader fall, Loyalists lost heart and began to raise their arms in surrender after many had been killed. Eager to avenge defeats at the Waxhaw Massacre and elsewhere, the rebels were in no mood to take prisoners. Rebels continued firing and shouted, "Give 'em Tarleton's Quarter!" But after a few more minutes of bloodletting, the colonels asserted control and gave quarter to around 700 Loyalists.
— Submitted April 25, 2008, by Mike Stroud of Bluffton, South Carolina.
2. Kings Mountain hero finally gets promotion
Spartanburg Herald-Journal
Janet Spencer
August 26, 2008

GAFFNEY - Col. James Williams, an Upstate resident mortally wounded during the Revolutionary War at the Battle of Kings Mountain, will receive a military promotion more than two centuries after he died. 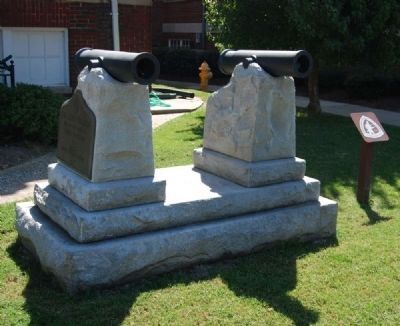 Photographed By Brian Scott, October 3, 2009
5. Col. James Williams Marker
was a good one. He paid his dues, and he deserves it," said Clarence Hammett, chairman of the Cherokee County Veterans Council, who visited Williams' grave site Monday afternoon.

Williams' role in history has been recognized in stages throughout the years.

Hundreds have walked by his final resting place without an inkling of the history so close at hand.

After he died in 1780, historians say Williams was first "hastily buried" not far from the battlefield. His grave was marked by a stone not common to the area and overtaken by grapevines.

Because he was from the Ninety-Six District that would become Laurens County, the Daniel Morgan Chapter of the Daughters of the American Revolution had his remains disinterred 135 years later.

But the DAR stopped in Gaffney and had Williams reburied on the front lawn of the Carnegie Library, now the Cherokee County Administration Building.

The Gaffney Ledger reported the reburial of the colonial leader at Kings Mountain was attended by more than 200 people and was "reverentially solemn."

The burial site was described as "a spot of lasting historic interest to the people of Gaffney, Cherokee County and the entire South."

Markers and a plaque were erected, but the Sons of the American Revolution recently organized 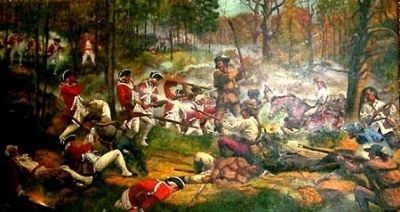 Photographed By Robert Wilson
6. Battle of King's Mountain
in the Laurens, Newberry and Saluda counties found history was not quite so well preserved, even with the best of intentions.

Williams' birth and death dates were not listed.

And Joseph Goldsmith of Clinton, secretary of the SAR group that bears Williams' name, said the information will be added to a 12-by-24-inch plaque that also will explain how Williams earned his promotion, but was not recognized before his death.

The plaque, to be provided by the SAR group and approved by the Cherokee County Council, will read in part: "After the August 18, 1780 Patriot victory at Musgrove's Mill, per Col. William Hill's memoirs, SC Gov. John Rutledge promoted Col. James Williams to Brigadier General of the SC Militia."

The promotion also is supported by the enemy's report of the Battle of Kings Mountain stating the British force had mortally wounded the American brigadier general, Goldsmith said.

Local veterans and the SAR members are dedicated to preserving as accurately as possible Williams' accomplishments, specifically because of his bravery when other leaders retreated from the Kings Mountain battle, he said.

"Four military forces met at Kings Mountain representing the Georgia militia, Gens. Shelby and Cleveland from North Carolina and Col. Williams from South Carolina. No one thought we could climb that mountain. But we surrounded 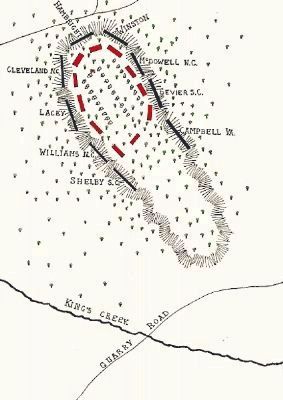 Photographed By Britishbattles.com
7. King's Mountain Tactical Map -
Red Being English Forces, Blue Being Patriot
it and started up," he said.

Tragically, Williams was shot soon after the push began and lived only three days after the victory.

Local veterans and the SAR plan to unveil the new plaque to be added to Williams' grave in time for the annual Cherokee County veteran's Memorial Day program next May.

Hammett said it was an honor for his group to work with the SAR members from the Laurens area to help preserve Williams' contribution to history.

For generations, the Williams family has continued to live on the plantation established by the man who would become a Revolutionary War hero.