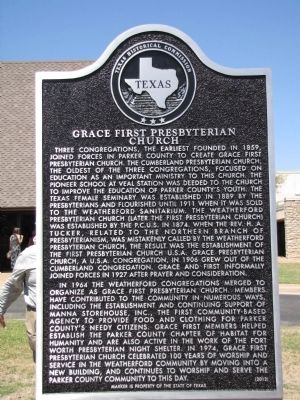 In 1964 the Weatherford congregations merged to organize as Grace First Presbyterian Church. Members have contributed to the 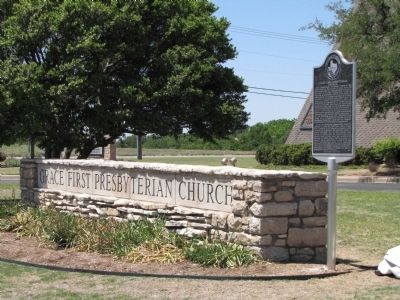 By QuesterMark, May 4, 2014
2. Grace First Presbyterian Church Sign and Marker
community in numerous ways, including the establishment and continuing support of Manna Storehouse, Inc., the first community-based agency to provide food and clothing for Parker County's needy citizens. Grace First members helped establish the Parker County chapter of Habitat for Humanity and are also active in the work of the Fort Worth Presbyterian Night Shelter. In 1974, Grace First Presbyterian Church celebrated 100 years of worship and service in the Weatherford Community by moving into a new building, and continues to worship and serve the Parker County community to this day. (2012)
Marker is property of the State of Texas