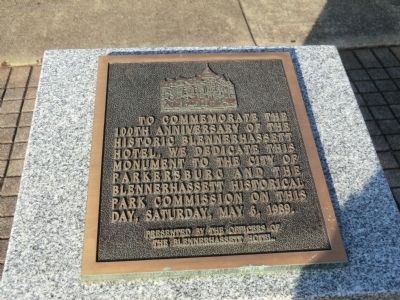 . This historical marker was erected by Presented by the Officers of the Blennerhassett Hotel. It is in Parkersburg in Wood County West Virginia

To commemorate the 100th anniversary of the historic Blennerhassett Hotel, we dedicate this monument to the city of Parkersburg and the Blennerhassett Historical Park Commission on the day, Saturday, May 6, 1989.

Erected by Presented by the Officers of the Blennerhassett Hotel.

Topics. This historical marker is listed in these topic lists: Industry & Commerce • Settlements & Settlers. A significant historical month for this entry is March 1878.

Location. 39° 15.961′ N, 81° 33.95′ W. Marker is in Parkersburg, West Virginia, in Wood County. Marker is on Little Kanawha Connector (2nd Street) near Ann Street. The marker is in Blennerhassett Point Park. Touch for map. Marker is in this post office area: Parkersburg WV 26101, United States of America. Touch for directions.

Other nearby markers. At least 8 other markers are within walking distance of this marker. George Rogers Clark (here, next to this marker); Escape to Freedom / Women of Courage 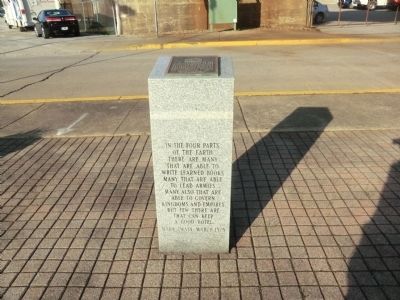