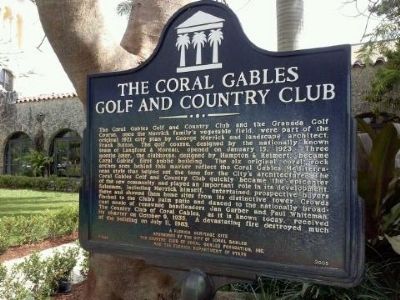 The Coral Gables Golf and Country Club and the Granada Golf Course, once the Merrick family’s vegetable field, were part of the original 1921 city plan by George Merrick and landscape architect, Frank Button. The golf course, designed by the nationally known team of Langford & Moreau, opened on January 15, 1923. Three months later, the clubhouse, designed by Hampton & Reimert, became Coral Gables’ first public building. The six original coral rock arches seen behind this marker reflect the Coral Gables Mediterranean style that helped set the tone for the City’s architecture. The Coral Gables Golf and Country Club quickly became the epicenter of the new community and played an important role in its development. Salesmen, including Merrick himself, entertained prospective buyers there and showed them home sites from its distinctive tower. Crowds flocked to the Club’s palm patio and danced to the nationally broadcast music of renowned bandleaders Jan Garber and Paul Whiteman. The Country Club of Coral Gables, as it is known today, received its charter on October 9, 1935. A devastating fire destroyed much of the building on July 11, 1983. 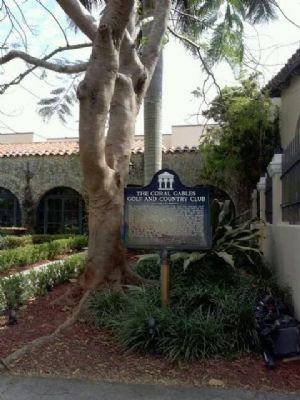 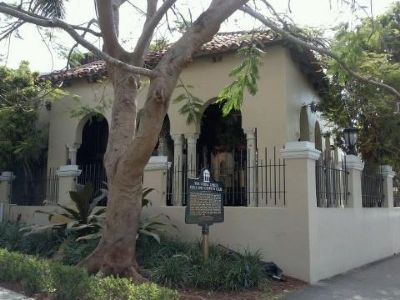 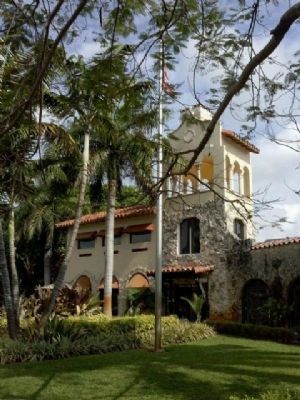