one-half mile west to townsite of 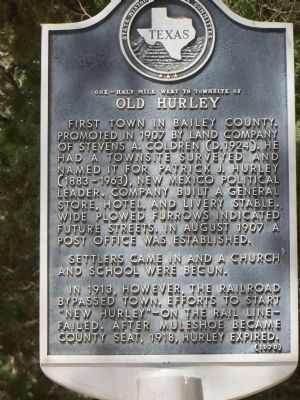 Photographed By Bill Kirchner, April 29, 2014
1. Old Hurley Marker
Inscription.
Old Hurley. one-half mile west to townsite of. First town in Bailey County. Promoted in 1907 by land company of Stevens A. Coldren (d. 1924). He had a townsite surveyed and named it for Patrick J. Hurley (1883-1963), New Mexico political leader. Company built general store, hotel and livery stable. Wide plowed furrows indicated future streets. In August 1907 a post office was established., Settlers came in and a church and school were begun., In 1913, however, the railroad bypassed town. Efforts to start “New Hurley”, on the rail line, failed. After Muleshoe became county seat, 1918, Hurley expired. . This historical marker was erected in 1970 by State Historical Survey Committee. It is Near Muleshoe in Bailey County Texas

Settlers came in and a church and school were begun.

Topics. This historical marker is listed in this topic list: Settlements & Settlers. A significant historical year for this entry is 1907.

Other nearby markers. At least 8 other markers are within 6 miles 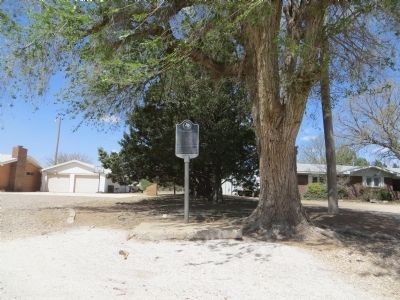