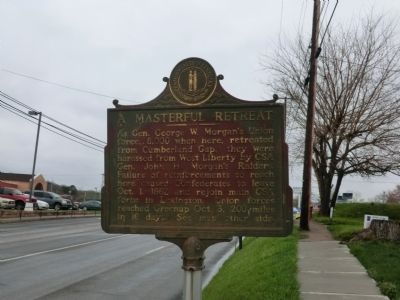 Photographed By Don Morfe, April 15, 2014
1. A Masterful Retreat Marker
Inscription.
A Masterful Retreat. Confederate Raids and Invasions, and a Federal Retreat, in Kentucky. As Gen. George W. Morgan's Union force, 8,000 when here, retreated from Cumberland Gap, they were harassed from West Liberty by CSA Gen. John H. Morgan's Raiders. Failure of reinforcements to reach here caused Confederates to leave Oct. 1, 1862 and rejoin main CSA force in Lexington. Union forces reached Greenup Oct. 3, 200 miles in 16 days. . This historical marker was erected in 1963 by Kentucky Historical Society-Kentucky Department of Highways. It is in Grayson in Carter County Kentucky

Topics and series. This historical marker is listed in this topic list: War, US Civil. In addition, it is included in the Kentucky - Confederate Raids and Invasions, and a Federal Retreat, and the Kentucky Historical Society series lists. A significant historical year for this entry is 1862.

Other nearby markers. At least 8 other markers are within 6 miles of this marker, measured as the crow flies. Eastern Kentucky Railway (approx. 0.2 miles away); County Named, 1838 (approx. half a mile away); We Honor William Jason Fields 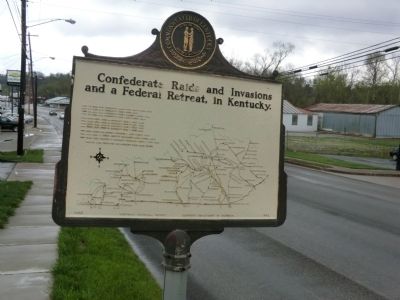 Photographed By Don Morfe, April 15, 2014
2. A Masterful Retreat Marker-Map on other side 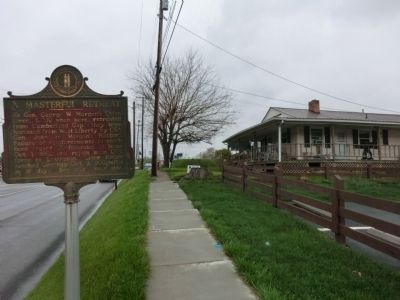