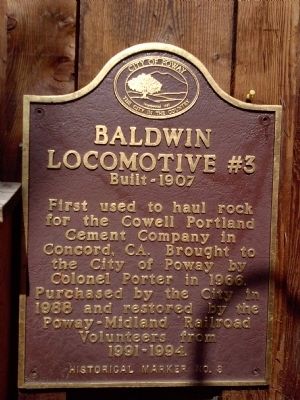 Photographed By Marsha A. Matson, May 24, 2014
1. Baldwin Locomotive No. 3 Marker
Inscription.
Baldwin Locomotive No. 3. Built - 1907. First used to haul rock for the Cowell Portland Cement Company in Concord, CA. Brought to the City of Poway by Colonel Porter in 1966. Purchased by the City in 1988 and restored by the Poway-Midland Volunteers from 1991-1994. . This historical marker was erected by City of Poway. It is in Poway in San Diego County California

First used to haul rock for the Cowell Portland Cement Company in Concord, CA. Brought to the City of Poway by Colonel Porter in 1966. Purchased by the City in 1988 and restored by the Poway-Midland Volunteers from 1991-1994.

Topics. This historical marker is listed in this topic list: Railroads & Streetcars. A significant historical year for this entry is 1966. 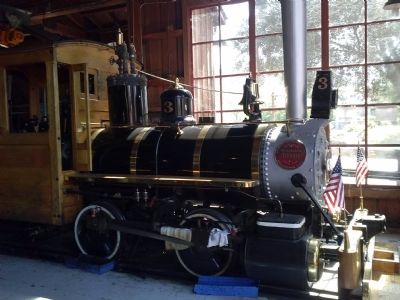 Photographed By Marsha A. Matson, May 24, 2014
2. Baldwin Locomotive No. 3
The centerpiece of the collection was built in 1907 by the Baldwin Locomotive Works in Philadelphia, PA for the Henry Cowell Lime and Cement Company of Cowell, CA. The locomotive, originally dubbed “Engine No. 3″, and its sister engines were used to haul rock from the company’s quarry to the crushing mill, a distance of three miles. In 1952, “No. 3″ was sold to the South San Francisco Scrap Metals Company, where it was used to move other pieces of railroad equipment around the scrap yard. In 1960, Charles Pollard of Vista, CA, bought “No. 3″ and extensively modified its appearance to resemble much older steam engines of the 1870s. He operated the locomotive, then called the “Robert E. Lee,” on the grounds of his machine shop. When Pollard died in 1966, the locomotive and various other pieces of rolling stock and railroad equipment were purchased by John S. Porter of Poway. Porter built a small station, house and shed for the train and operated it on his land which today comprises part of our park. Mr. Porter died in 1980, ending the operation of his “Poway Village and Rattlesnake Creek Railroad.” In December of 1987, the City of Poway purchased the Porter property – lock, stock and locomotive. The locomotive and its tender have been restored to full operational condition by the PMRRV. Restoration, certification and testing were completed early in 1997 and the locomotive made its inaugural PMRR passenger run on July 4, 1997. 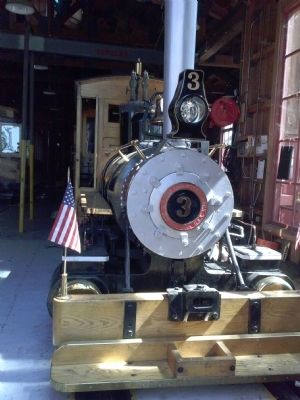 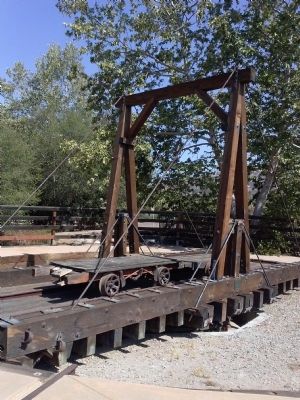 Photographed By Marsha A. Matson, May 24, 2014
4. Turntable
The gallows style turntable was built for the PMRR in 2002 and dedicated July 4 of that year. Although based on the design of the Laws, California, turntable, it is two-thirds the size at 35 feet long. This is one of only five Gallows turntables operating in California. Operated by hand, the turntable is used to reposition equipment from one track to another. It is also used to turn equipment 180 degrees for reverse running to equalize wear on the wheels and track. 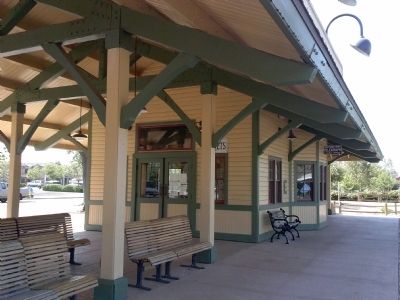 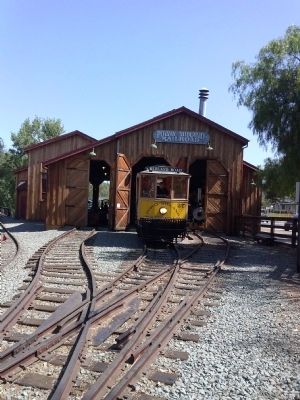 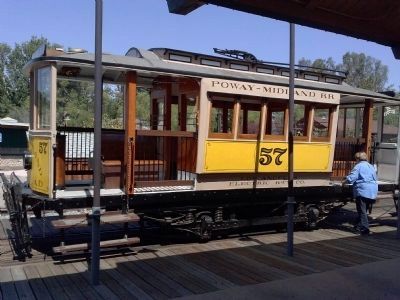 Photographed By Marsha A. Matson, May 24, 2014
7. 1894 Trolley
Built in 1894 (approximately), it was operated as part of the "Yellow Line" interurban trolley system of the Los Angeles Railway (LARY). Originally 20 feet long, it was configured as a simple "open bencher." In 1912, it was reworked in LARY's shops. Vestibules were added on each end, bringing its length to 30 feet. It was sold to a movie studio in 1923 where it was further modified to the combination of open bench and enclosed seating known as the "California Car" configuration. At some point in its history, the trolley's electric motors were replaced with a Corvair automobile engine, which is the current mode of power. The PMRRV purchased the trolley in the Spring of 1993 from a private party. Structural, mechanical and cosmetic restorations were made, and it has been operational since July, 1997. 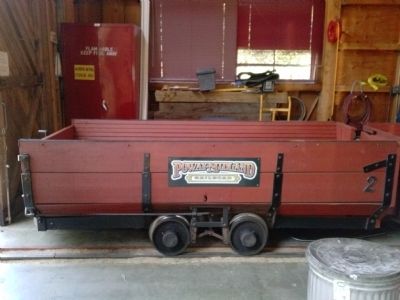 Photographed By Marsha A. Matson, May 24, 2014
8. Gondola Car
The four wood-sided gondola cars are used today for carrying passengers around the track behind the Fairmont speeder and behind the Locomotive. They were built in the 1880s for use in hauling a different cargo – rocks and ore from the mines. They are typical of the narrow gauge ore cars once used in mining operations throughout the West. Originally, the interiors of the cars were faced with sheet metal to prolong the useful life of the wooden planks forming the sides and ends. All of the wood was in such poor condition that it was replaced and seats were installed to carry passengers. Each car seats up to 12 passengers. 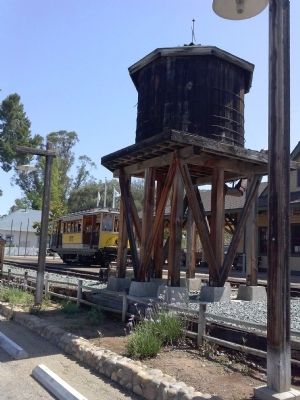 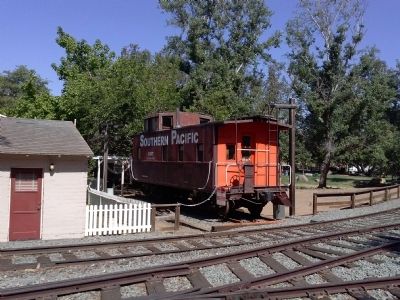 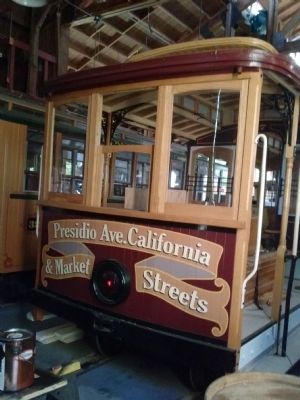