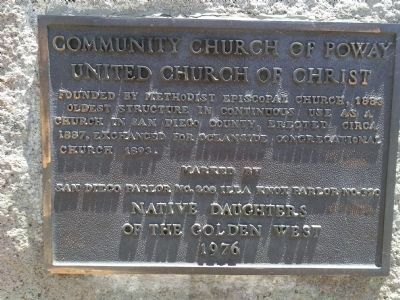 Founded by Methodist Episcopal Church 1883. Oldest structure in continuous use as a church in San Diego County. Erected circa 1887, exchanged for Oceanside Congregational Church, 1893.

Topics and series. This historical marker is listed in this topic list: Churches & Religion. In addition, it is included in the Native Sons/Daughters of the Golden West series list. A significant historical year for this entry is 1883.

Location. 32° 57.673′ N, 117° 2.399′ W. Marker is in Poway, California, in San Diego County. Marker can be reached from Community Road north of Hilleary Place, on the right when traveling north. Touch for map. Marker is at or near this postal address: 13501 Community Road, Poway CA 92064, United States of America. Touch for directions.

Other nearby markers. At least 8 other markers are within 2 miles of this marker, measured as the crow flies. A different marker also named Community Church of Poway (here, next to this marker); Flint Farm (approx. 0.2 miles away); Templars Hall (approx. 0.6 miles away); Nelson House (approx. 0.7 miles 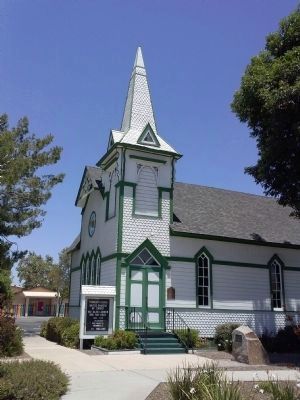 Photographed By Marsha A. Matson
2. Community Church of Poway
Marker is visible mounted on the rock to the right of the stairs.

Additional commentary.
1. Community Church of Poway
Community Church, originally a Methodist-Episcopal congregation, was established in July, 1879 by the Rev. Mr. Hough of Los Angeles. The first worshipers met in the local school house. In 1883, Joseph and Amanda Stone and another couple donated the land for the present building. Church members and friends provided most of the materials and labor, and Samuel Bowron acted as construction superintendent. The redwood structure, a New England style church, was completed in 1887. In 1893, the church became the Congregational Church of Poway. In the late 1920s, the name was changed to Community Church of Poway. The Native Daughters of the Golden West designated the sanctuary as a historical site on Sept. 26, 1976, recognizing the 120-year old chapel as the oldest wooden structure in continuous use as a church in San Diego County.
Source: 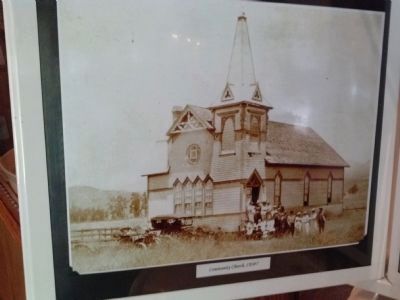