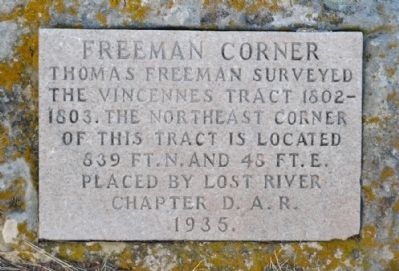 By Duane Hall, May 22, 2014
1. Freeman Corner Marker
Inscription.
Freeman Corner. . . . Thomas Freeman surveyed the Vincennes Tract 1802-1803. The northeast corner of this tract is located 839 ft. N. and 48 ft. E. . Placed by Lost River Chapter D.A.R. . 1935. . This historical marker was erected in 1935 by Lost River Chapter of Daughters of the American Revolution. It is in Orleans in Orange County Indiana

Erected 1935 by Lost River Chapter of Daughters of the American Revolution.

Topics and series. This historical marker is listed in these topic lists: Native Americans • Settlements & Settlers. In addition, it is included in the Daughters of the American Revolution series list.

Location. 38° 40.584′ N, 86° 27.181′ W. Marker is in Orleans, Indiana, in Orange County. Marker can be reached from N. Maple Street (State Road 37) north of County Road 810N, on the right when traveling north. Marker is located near the Orleans water tower. Touch for map. Marker is in this post office area: Orleans IN 47452, United States of America. Touch for directions. 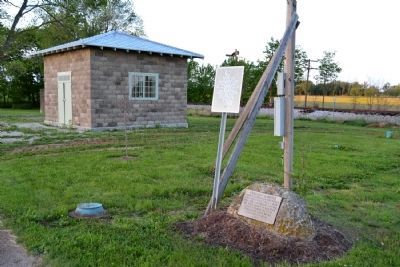 Additional comments.
1. Location of Freeman's Corner
The nearby 1966 marker erected by the Indiana Sesquicentennial Commission indicates a different location for the survey corner. The Indiana state marker states the corner is 250 feet east.
— Submitted May 31, 2014, by Duane Hall of Abilene, Texas. 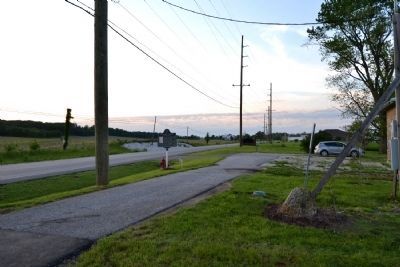 By Duane Hall, May 22, 2014
3. Freeman Corner Marker
View to north with Indiana State marker on Freeman's Corner in background 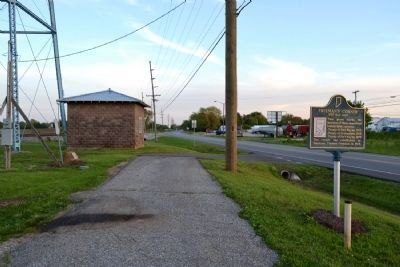 By Duane Hall, May 22, 2014
4. Freeman Corner Marker
View to south with D.A.R. marker in background
to the left of the driveway 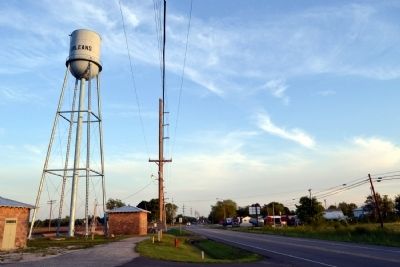