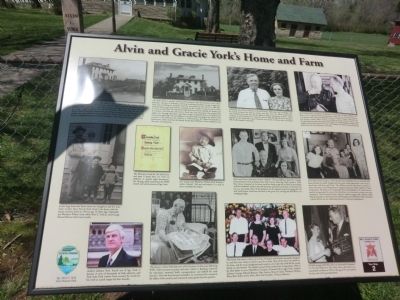 (Inscription of photos from left to right, top to bottom)
(Inscription under the photo of the house)
What most people know about Sgt. Alvin C. York comes from the Academy Award winning movie SERGEANT YORK. Near the end of the film Joan Leslie, who played Gracie Williams York, leads Gary Cooper down a lane and shows him a new house that she says is his-gift to him by the State of Tennessee. Well, that’s just not true. The Rotary Club of Nashville wanted to do something to honor Sgt. York. Rotarians made pledges, but most of them went uncollected, and the Yorks were given 400 acres of land, an unfinished house and hefty mortgage, which they had no means of paying.

(Inscription under the photo of the front of the house)
The Yorks faced a number of financial downturns that threatened to leave them homeless. Because of jealousies and long standing bad blood, people fought Sgt. York and everything he stood for when he returned home from the war. He could have used his fame to get rich and live anywhere in the world he wanted, but he chose to return to Pall Mall. He wanted to make life better for his friends, his family 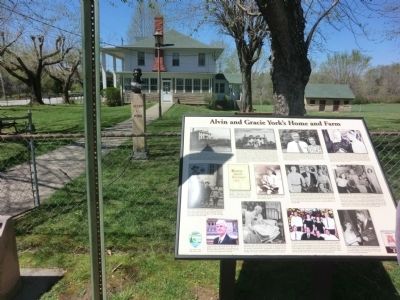 Click or scan to see
this page online
and his enemies. For him the only way to break the cycle of poverty that gripped the region was through education, and many people considered that to be impractical if not downright silly. On two different occasions York mortgaged this house to his enemies so he could pay the teachers at York Institute, the school he founded in Jamestown. Had it not been for family friend Susie Williams, York would have lost this place to foreclosure.

(Inscription under the photo of Alvin and his wife)
Everybody was always welcome at the York house. York never met a stranger, and he treated everyone the same no matter who they were. He talked to governors and presidents the same way that he talked to farmers and factory workers. Today everyone is still welcome here. Take the time to walk through the house and get a glimpse of the simple life a great American hero lived, in a house that was always full of talk, laughter and music.

(Inscription under the photo of Alvin and his son Tommy)
Alvin York became a competent marksman at an early age. His father, William, who died in 1911 at age 48, loved hunting and was said to be one of the best marksman in Tennessee. Sgt. York is pictured here with son Thomas “Tommy” Jefferson York, who became a police officer. Tommy was killed in the line of duty in 1972 at age 32, only eight years after the death of his father. His 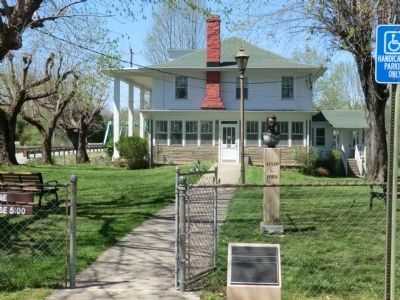 Photographed By Don Morfe, April 17, 2014
3. Alvin and Gracie York's Home and Historic Marker
widow Margaret and their three children continued living in the house, and Margaret remained as a hostess and tour guide when the home became a state park.

(Inscription under the photo of Alvin and his three children)
In this large home the Yorks raised two daughters and five sons. York’s mother, Mary Brooks York, lived in the home with his family until her death in 1943 at age 76. Here Sgt. York holds son Woodrow Wilson York while Alvin C. York Jr. and George Edward Buxton York stand nearby. (Inscription under the photo of Warranty Deed) The Warranty Deed for the York home and farm is dated May 18, 1922. In addition to typical legal documents, the 10-page deed enumerates the WWI awards and achievements of Sgt. York.

(Inscription under the photo of Woodrow Wilson York)
As a young man Woodrow Wilson York became a soldier himself. Tall and red-haired, it is said he most resembled his father. (Inscription under of the photo of Alvin and Grace and three of their children) Alvin and Gracie with three of their children, Thomas Jefferson York, Rev. George Edward Buxton York and Betsy Ross York Lowrey. After Sgt. York’s death in 1964, Miss Gracie remained in the home until her death at age 84 in 1984. In accordance with her husband’s wishes, she sold the home and farm to the State of Tennessee for use as a state park. More of the property can be enjoyed on foot 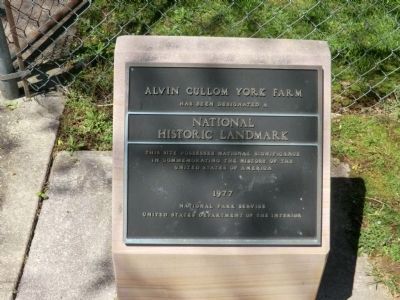 Photographed By Don Morfe, April 17, 2014
4. Alvin C York Farm-National Historic Landmark
by taking the .06 mile York Nature Trail from the barn to the grave site, crossing the Wolf River on a swinging bridge.

(Inscription under the photo with Alvin and his children)
After York had his stroke in 1954 that left him bedridden the rest of his life, this home became this world. People from all around made pilgrimages to this house to spend time with him and Gracie. The children married and moved in upstairs or across the street at the Honeymoon Cottage, keeping the family together in those trying times. He loved to be surrounded by his grandchildren. He could often be spotted sitting under the trees in his wheelchair or on the porch waving at cars that zoomed by. On the Fourth of July, when he could no longer walk, someone would help him outside. As fireworks went off throughout the Wolf River Valley, he’d shoot a pistol off into the air celebrating America’s continued independence.

(Inscription under the photo of his son Andrew Jackson York)
Andrew Jackson York, fourth son of Sgt. York, is known to tens of thousands of York admirers and York State Park visitors from around the world for his work as a park ranger for four decades. (Inscription under the photo of York sitting on the bed) This house is where York did most of his business. In the years following WWI, York’s personal secretary and tutor, Arthur S. Bushing, improved his education, answered 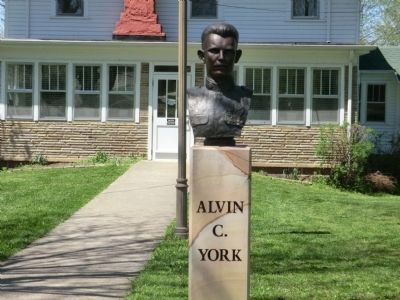 Photographed By Don Morfe, April 17, 2014
5. Alvin C York-bust in front of house
York’s correspondence and drafted his early speeches. After the hero became bedridden, he maintained his interest in the affairs of his country and welcomed many guests into his quarters.

(Inscription under the photo at Alvin’s funeral)
This house was always a flurry of activity. Strangers and friends constantly dropped in, and they were always invited to stay for a meal. Most of the food was raised on the farm, and the meat slaughtered and cured on site. Each day, York led his young family in a devotional. The children joined their mother here in September 1964 to lay their father to rest at Wolf River Cemetery. Pictured, left to right, front, Andrew Jackson, George Edward Buxton, Miss Gracie, Alvin Jr. Back, Woodrow Wilson, Betsy Ross York Lowrey, Mary Alice York Franklin, Thomas Jefferson.

(Inscriptions under the photo of Mary Alice and Senator Kefauver)
The York’s youngest child, Mary Alice, was welcomed by Tennessee’s U.S. Sen. Estes Kefauver in 1954. Mary Alice, who died in an automobile accident in 1994 at the age of 59, was named for each of her grandmothers.

Topics. This memorial is listed in these topic lists: Heroes • War, World I. A significant historical date for this entry is May 18, 1837. 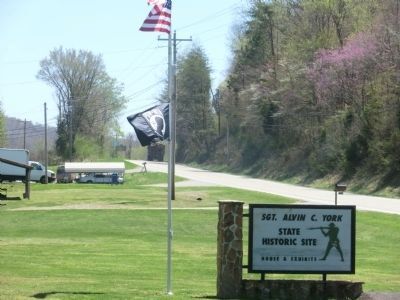 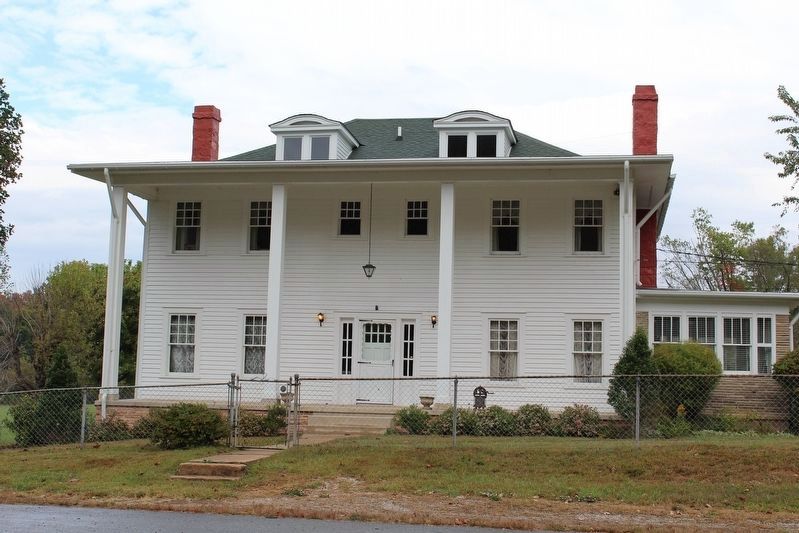