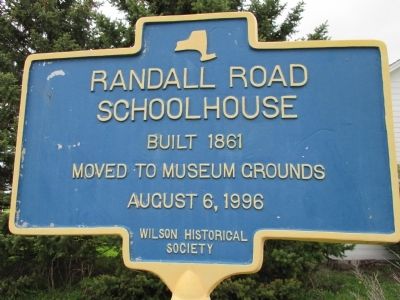 Location. 43° 17.883′ N, 78° 49.629′ W. Marker is in Wilson, New York, in Niagara County. Marker can be reached from Lake Street (New York State Route 425). Marker and schoolhouse are in Hojack Park, the grounds of the Wilson Historical Society museum. The marker and schoolhouse cannot be seen from Lake Street. See the Hojack Park marker in the HMdb to view the Wilson Historical Society street signs and entrance. Touch for map. Marker is in this post office area: Wilson NY 14172, United States of America. Touch for directions. 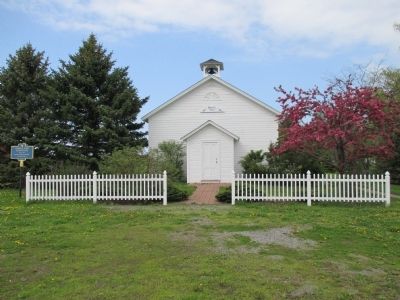 More about this marker. The museum buildings have very limited hours, and only during the warmer months.

Regarding Randall Road Schoolhouse. The schoolhouse host, a former Wilson teacher, on Memorial Day 2014 explained that after the school was closed, a local person leased it for a very small fee and rented it to small organizations as space for plays and meetings, including to the local 4H club run by her mother. Over time, interest in client organizations declined, resulting in the plan to move the schoolhouse here.

Visitors can pull the rope to ring the bell in the bell tower.

The following memories, in speech form, by a former student are hanging in a frame in the schoolhouse, headlined Rededication of the Randall Road Schoolhouse: 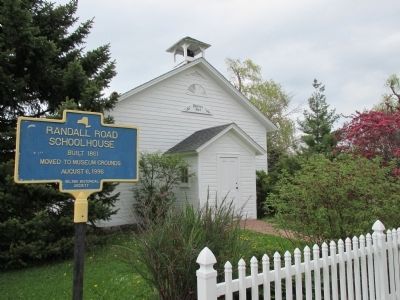 By Anton Schwarzmueller, May 17, 2014
3. Randall Road Schoolhouse and Marker
of a child.

You know, it's not easy being a child and a girl. I had to walk seven miles or more to school every day if I wanted to get an education. I was lucky, girls didn't always get to go to school - mostly boys went. We walked in snow, rain and sleet too. But I wanted to go to school, so I got there as often as I could. Sometimes my mother wouldn't send me because there were mumps or measles or because I had to baby-sit while they worked in the fields. But when I got to school, I learned a lot. Oh, we did the 3 R's every day. You know, that's readin, ritin and rithmetic. Later we did a lot of geography lessons and learned about growing food and plants.

We had thirty students in our school in eight grades. Our teacher has to teach all of us in the same day. She'd work with a few of us at a time, while others worked on busy work or other lessons or practiced our penmanship with a quill.

Our first teacher was a woman. She was called a school marm, but she soon got married and once women teachers married, they could no longer teach. Families paid the teacher by giving them food, shelter and clothing. I can remember, my teacher used to live with us a few months at a time, then went to live with another family. Our next teacher was a man. He was called a school master. Early teachers didn't have special training. They only needed to know how to read and 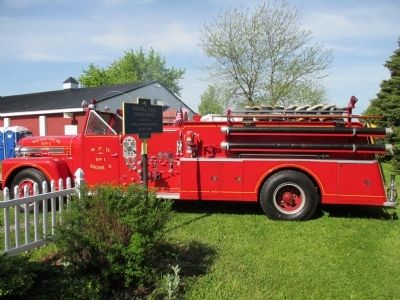 By Anton Schwarzmueller, May 26, 2014
4. Randall Road Schoolhouse Marker and Fire Truck
This fire truck was displayed during the Memorial Day Fair. It was parked next to the marker.
write. Later teachers attended training schools like the one we had here in Wilson.

He saw that I was left handed and made me start writing with my right hand. He said that people who write with their left hand have evil in them. THAT SCARED ME!

One day, we heard our teacher was fired. I guess he was Catholic and back then, in this area, the Klu Klux Klan was active and only wanted Protestants in this area. Can you imagine what they must have been like! But the families liked him so much they decided he could stay. We were glad because we liked him too. I can remember practicing drawing slants and pothooks for hours, Being able to draw straight lines and smooth curves was an important part of beautiful penmanship. We were so proud of our writing. Every day, we worked so hard, keeping our school clean. The windows of the school allowed in the only light so we washed them often.

We all had chores, especially when we were BAD! We had to carry water, do extra cleaning, do extra schoolwork, or clean the "outhouses" when we were punished. Some boys and girls told me (especially boys) about having to sit in the corner with a dunce hat on, or being "flogged" by another student or the teacher if they were bad. Can you imagine that!

I always thought that it was funny that we had to hold one finger up to go to the outhouse. I could never figure that out. 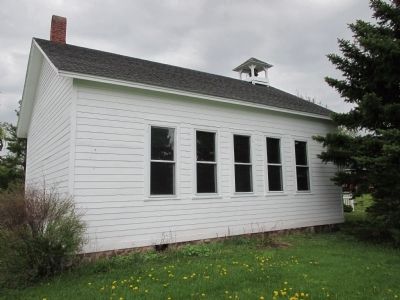 By Anton Schwarzmueller, May 17, 2014
5. West Side Randall Road Schoolhouse
moms had to pack our lunches every day. Some of the odors in the classroom from students or their lunches, YUK! I remember when a boy brought sardines for sandwiches - brother! - and another boy, big enough to go trappin with his father, would catch skunk and then smell like a skunk for days. He'd come in and was so proud and brag "me and my Dad skun a skunk!" Our teacher shook his head and tried to teach him to say it right, but he never learned. We all used the same cup to drink out of at lunch and all day long and if I think back, it wasn't washed that often.

We often had problems with, you know - Yep - head lice! Parents usually shaved the boys heads but we girls had to suffer through it, though they cut our hair short.

Our teacher liked to play games. At recess time, he would take us outside and we'd play games like Ante, Ante, Over. That's where we had teams and would line up on each side of the school building. The captain would throw the ball up and say "Ante, Ante, Over." The other team would know there is a ball coming, but didn't know where the ball would land. You had to catch the ball in the air. When it was caught, the student would run around the school until they caught somebody from the other side and take them back to their side. I was good at that game. We also loved jumping rope. playing horseshoes, softball, or jacks. 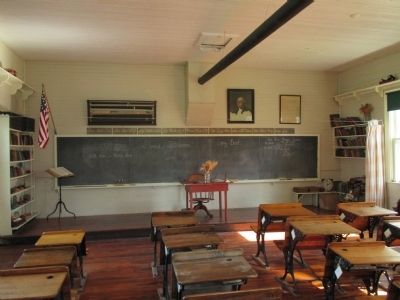 By Anton Schwarzmueller, May 26, 2014
6. Randall Road Schoolhouse Inside
View from the back, a few steps inside from the entrance.
all our families got together and we had a picnic. That's when our parents painted the schoolhouse or fixed it up. Everybody helped to keep our schoolhouse looking nice and, well I bet you'd like to see our Randall Road Schoolhouse. We are so proud of it. We have a new teacher now; she's a woman. Please follow our teacher Miss Andritz, and the other children in our school.

And a special thank you to all of you who helped to fix our school up. Again, it's because everyone worked together! "SCHOOL IS OPEN" everyone! - Karen (Beals) Raccuia, May 18, 1997. 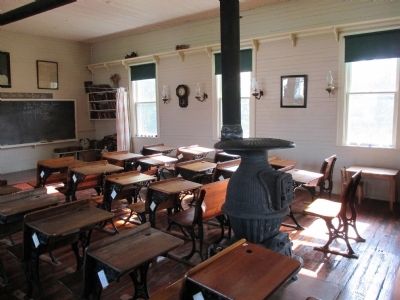 By Anton Schwarzmueller, May 26, 2014
7. Randall Road Schoolhouse Inside 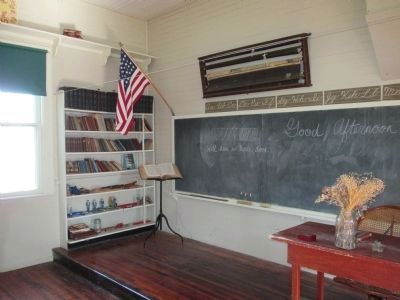 By Anton Schwarzmueller, May 26, 2014
8. Randall Road Schoolhouse Inside 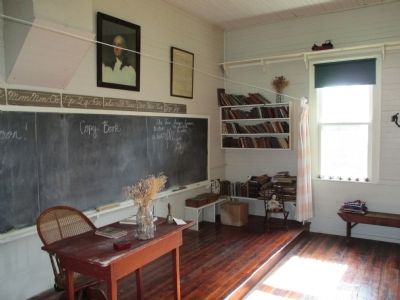 By Anton Schwarzmueller, May 26, 2014
9. Randall Road Schoolhouse Inside 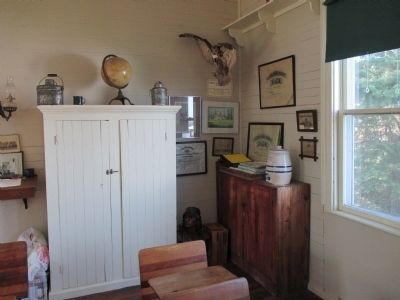 By Anton Schwarzmueller, May 26, 2014
10. Randall Road Schoolhouse Inside 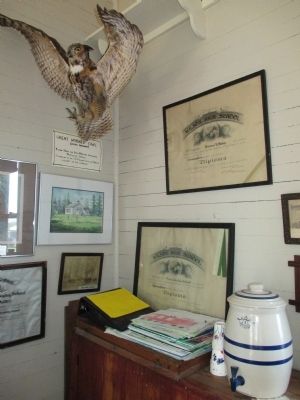 By Anton Schwarzmueller, May 26, 2014
11. Randall Road Schoolhouse Inside 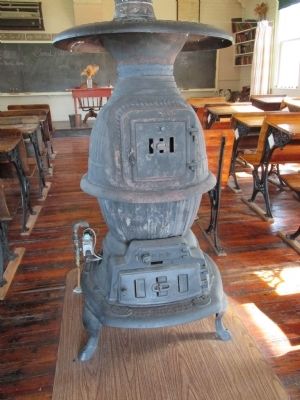 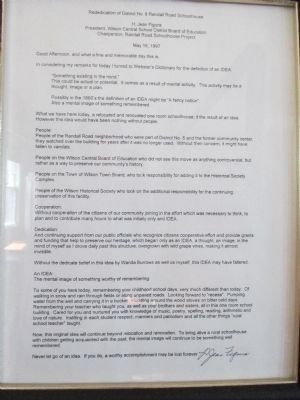 By Anton Schwarzmueller, May 26, 2014
13. Randall Road Schoolhouse Rededication Speech
Framed inside the schoolhouse, dated May 18, 1997. 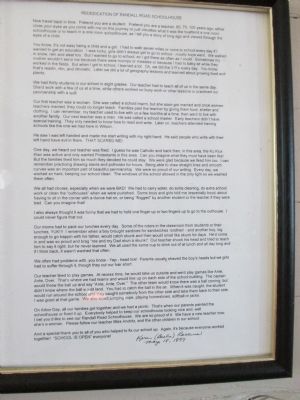