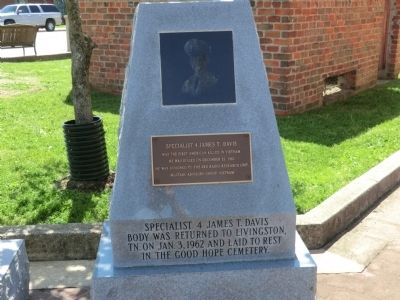 (Bronze Plaque)
Specialist 4 James T. Davis was the first American killed in Vietnam. He was killed on December 22, 1961. He was assigned to the 3rd Radio Research unit, Military Advisory Group.

(Inscription on the memorial)
Specialist 4 James T. Davis body was returned to Livingston, TN on Jan. 3, 1962 and laid to rest in the Good Hope Cemetery. 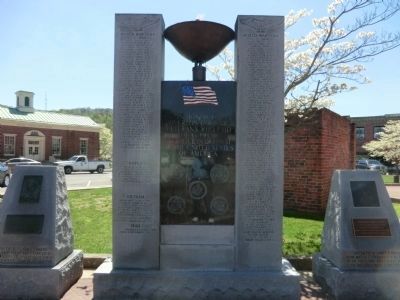 By Don Morfe, April 17, 2014
2. Specialist 4 James T. Davis Marker
This marker is located on the right of the Overton County Veterans Memorial
(within shouting distance of this marker); Albert Houston Roberts (approx. 0.3 miles away); Camp Zollicoffer (approx. 2.7 miles away); Heart of Controversy (approx. 3.6 miles away). Touch for a list and map of all markers in Livingston.
Credits. This page was last revised on June 16, 2016. It was originally submitted on June 9, 2014, by Don Morfe of Baltimore, Maryland. This page has been viewed 391 times since then. Photos:   1, 2. submitted on June 9, 2014, by Don Morfe of Baltimore, Maryland. • Bill Pfingsten was the editor who published this page.
Share This Page.