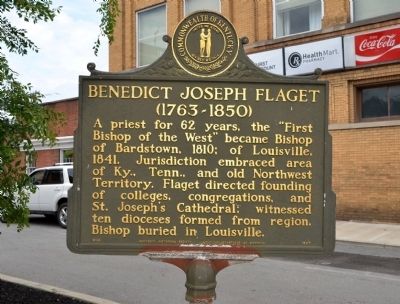 Photographed By Karl Stelly, June 2, 2014
1. Benedict Joseph Flaget Marker
Inscription.
Benedict Joseph Flaget. A priest for 62 years, the "First Bishop of the West" became Bishop of Bardstown, 1810; of Louisville, 1841. Jurisdiction embraced area of Ky., Tenn., and old Northwest Territory. Flaget directed founding of colleges, congregations, and St. Joseph's Cathedral; witnessed ten dioceses formed from region. Bishop buried in Louisville. . This historical marker was erected in 1988 by The Kentucky Historical Society and The Kentucky Department of Highways. It is in Bardstown in Nelson County Kentucky

Topics and series. This historical marker is listed in these topic lists: Charity & Public Work • Churches & Religion • Education. In addition, it is included in the Kentucky Historical Society series list. A significant historical year for this entry is 1810. 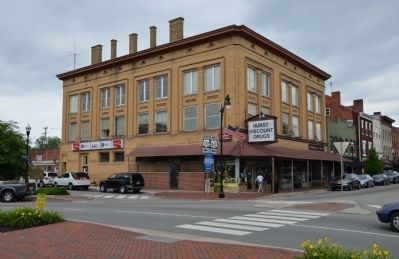 Photographed By Karl Stelly, June 2, 2014
2. The Square in Bardstown
Marker can be seen near the left edge of photo. This view is looking towards the Northwest.