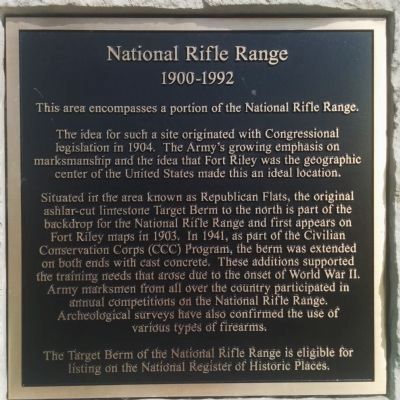 This area encompasses a portion of the National Rifle Range.

The idea for such a site originated with Congressional legislation in 1904. The Army's growing emphasis on marksmanship and the idea that Fort Riley was the geographical center of the United States made this an ideal location.

Situated in the area known as Republican Flats, the original ashlar-cut limestone Target Berm to the north is part of the backdrop for the National Rifle Range and first appears on Fort Riley maps in 1903. In 1941, as part of the Civilian Conservation Corps (CCC) Program, the berm was extended on both ends with cast concrete. These additions supported the training needs that arose due to the onset of World War II. Army marksmen from all over the country participated in annual competitions on the National Rifle Range. Archeological surveys have also confirmed the use of various types of firearms.

Topics and series. This historical marker is listed in these 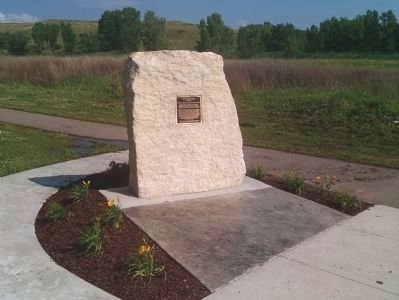 Click or scan to see
this page online
topic lists: Charity & Public Work • Forts and Castles • War, World II. In addition, it is included in the Civilian Conservation Corps (CCC) series list. A significant historical year for this entry is 1904.

Location. 39° 4.467′ N, 96° 50.417′ W. Marker is in Fort Riley, Kansas, in Geary County. Marker can be reached from Lookout Drive -or- Thunder Road. This marker is along the walking trail that surrounds the Colyer Forsyth Neighborhood on Fort Riley, KS. The walking trail begins just west (approx. 50 meters) of the intersection of Lookout Drive and Black Kettle Drive. Touch for map. Marker is in this post office area: Fort Riley KS 66442, United States of America. Touch for directions.

More about this marker. The National Rifle Range marker that is currently present is the second iteration. The original marker was erected in late-2013. The plague from the original marker was taken down in April of 2014. A complete replacement (including a new plaque) was made in May of 2014. 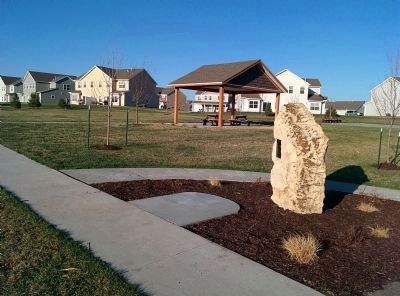