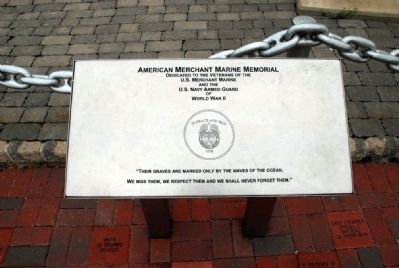 Dedicated to the Veterans of the
U.S. Merchant Marine
and the
U.S. Navy Armed Guard
of
World War II

Their graves are marked only by the waves of the ocean.
We miss them, we respect them and we shall never forget them.

Topics and series. This historical marker and memorial is listed in these topic lists: War, World II • Waterways & Vessels. In addition, it is included in the US Navy Armed Guard series list.

Location. 39° 56.544′ N, 75° 7.93′ W. Marker is in Camden, New Jersey, in Camden County. Marker is on 1 Riverside Drive. The memorial is in Ulysses S. Wiggins Waterfront Park, near The Battleship USS New Jersey. Touch for map. Marker is in this post office area: Camden NJ 08103, United States of America. Touch for directions. 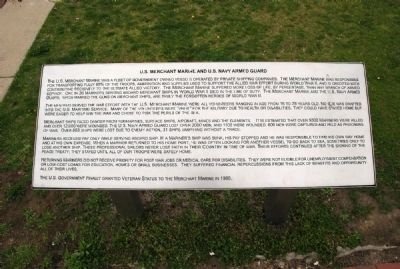 The men who served the war effort with the U.S. Merchant Marine 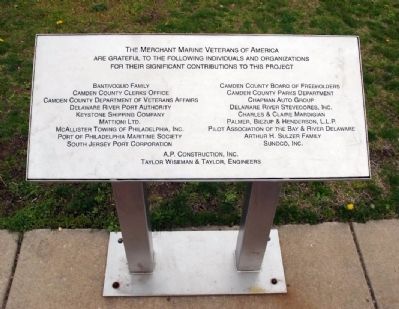 Photographed By R. C.
3. A third companion marker identifies individuals and corporations that supported the memorial
were all volunteers ranging in age from 16 to 78 years old. No one was drafted into the U.S. Maritime Service. Many of the volunteers were "unfit" for the military due to health or disabilities. They could have stayed home but were eager to help win the war and chose to risk the perils of the sea.

Merchant ships faced danger from submarines, surface ships, aircraft, mines and the elements. It is estimated that over 9300 Mariners were killed and over 12,000 were wounded. The U.S. Navy Armed Guard lost over 2,000 men, and 1,100 were wounded. 600 men were captured and held as prisoners of war. Over 863 ships were lost due to enemy action, 31 ships vanishing without a trace.

Mariners received pay only while serving aboard ship. If a Mariner's ship was sunk, his pay stopped and he was responsible to find his own way home and at his own expense. When a Mariner returned to his home port, he was often looking for another vessel to go back to sea, sometimes only to lose another ship. These professional sailors never lost faith in their country in time of war. Their efforts continued after the signing of the peace treaty. They stayed until all of our troops were safely home.

Returning Mariners did not receive priority for post war jobs or medical care for disabilities. They were not eligible for unemployment compensation or low-cost loans for education, homes or small 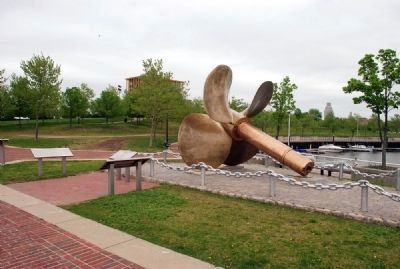 Photographed By R. C.
4. Profile of the propeller memorial
The main and two companion markers are to the left of the propeller in this photograph.
businesses. They suffered financial repercussions from this lack of benefits and opportunity all of their lives.

The U.S. Government finally granted Veteran Status to the Merchant Marine in 1988. 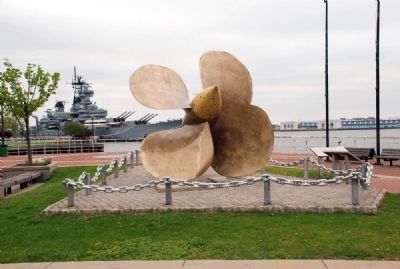 Photographed By R. C.
5. Direct view of the propeller
The Battleship USS New Jersey can be seen in the background. 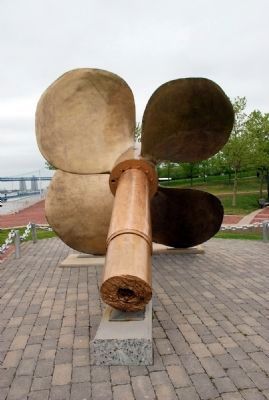