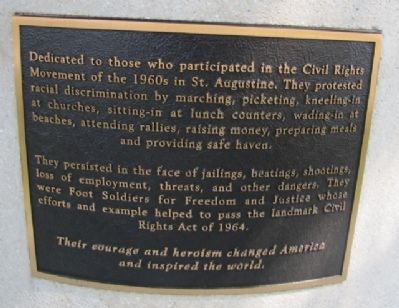 Dedicated to those who participated in the Civil Rights Movement of the 1960s in St. Augustine. They protested racial discrimination by marching, picketing, kneeling-in at churches, sitting-in at lunch counters, wading-in at beaches, attending rallies, raising money, preparing meals and providing safe haven.

They persisted in the face of jailings, beatings, shootings, loss of employment, threats and other dangers. They were Foot Soldiers for Freedom and Justice whose efforts and example helped to pass the landmark Civil Rights Act of 1964.

Their courage and heroism changed America and inspired the world.

Reverse:
Erected in 2011 with the cooperation with the City of St. Augustine, the St. Augustine Foot Soldiers Monument was made possible through the generosity of a wide diversity of supporters, with special recognition to major donors 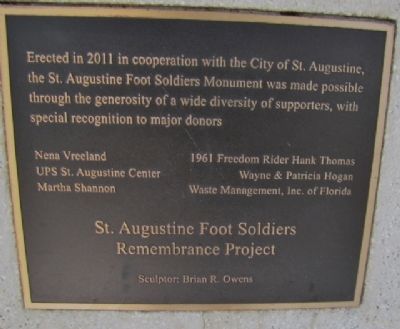 Topics. This historical marker and monument is listed in these topic lists: African Americans • Civil Rights • Government & Politics. A significant historical year for this entry is 1964.

Location. 29° 53.546′ N, 81° 18.692′ W. Marker is in St. Augustine, Florida, in St. Johns County. Marker is on King Street near Charlotte Street, on the left when traveling west. St. Augustine Foot Soldiers Monument is located near the corner of King St. and Charlotte St. in the Southeast corner of the Plaza De La Constitucion (known as "the Plaza"), an historic public park in downtown St. Augustine, Florida. It is in remembrance of the people who engaged in various forms of peaceful protest in St. Augustine in the early sixties to advance the cause of civil rights, contributing to the passage of the Civil Rights Act of 1964. The monument, commissioned by the St. Augustine Foot Soldiers Remembrance Project, Inc. (the "Project"), was installed and unveiled in May, 2011. Touch for map. Marker is in this post office area: Saint Augustine FL 32084, United States of America. Touch for directions. 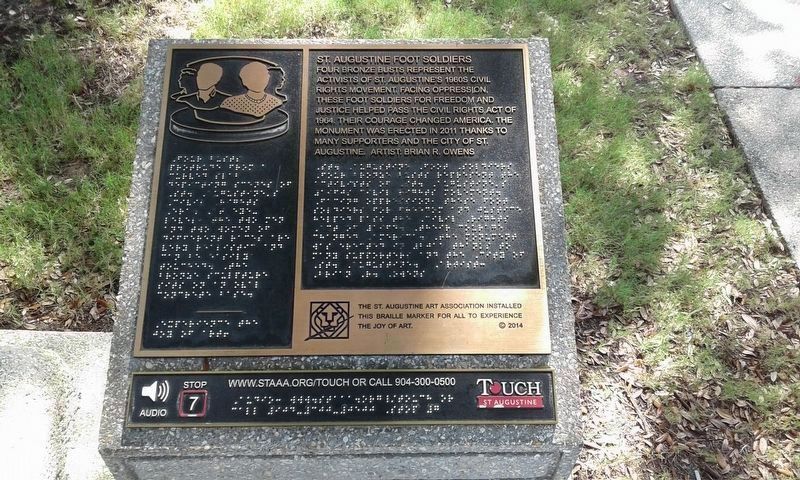 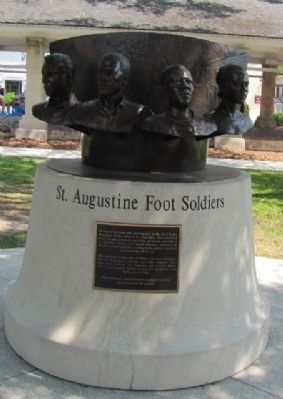