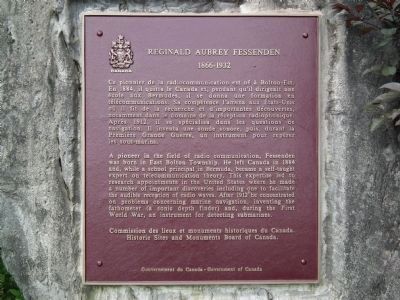 A pioneer in the field of radio communication, Fessenden was born in East Bolton Township. He left Canada in 1884 and, while a school principal in Bermuda, became a self-taught expert on telecommunication theory. This expertise led to research appointments in the United States where he made a number of important discoveries including one to facilitate the audible reception of radio waves. After 1912 he concentrated on problems concerning marine navigation, inventing the fathometer (a sonic depth finder) and, during the First World War, an instrument for detecting submarines. 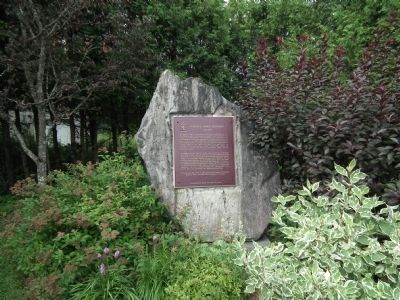 Topics and series. This historical marker is listed in this topic list: Communications. In addition, it is included in the Canada, Historic Sites and Monuments Board series list. A significant historical year for this entry is 1884.

Location. 45° 11.035′ N, 72° 16.81′ W. Marker is in Austin, Québec, in Memphrémagog. Marker is at the intersection of Chemin Nicholas-Austin and Chemin Fisher, on the right when traveling east on Chemin Nicholas-Austin. One mile south of the marker is the Saint Benedict's Abbey (Abbaye de Saint-Benoit-du-Lac), renowned for a tranquil setting. The monks of the abbey are makers of fine cheeses and apple cider from their apple orchards. The cathedral's organ is most impressive, weighing over eight (8) tons and composed of 2,692 wind pipes. Touch for map. Marker is at or near this postal address: 4 Chemin Fisher, Austin QC J0B 1B0`, Canada. Touch for directions. 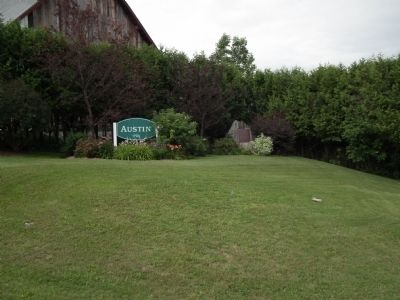