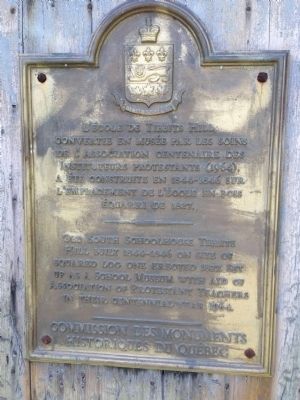 Photographed By Jacques Titolo, 2014
1. Tibbits Hill School Marker
Inscription.
Tibbits Hill School. . Old south schoolhouse Tibbits Hill built 1844-1846 on site of squared log one erected 1827. Set up as a school museum with aid of Association of Protestant Teachers in their centennial year 1964. . This historical marker was erected in 1964 by Commission des Monuments Historiques du Quebec. It is Near Knowlton in Brome-Missisquoi Québec

Old south schoolhouse Tibbits Hill built 1844-1846 on site of squared log one erected 1827. Set up as a school museum with aid of Association of Protestant Teachers in their centennial year 1964.

Topics. This historical marker is listed in this topic list: Education. A significant historical year for this entry is 1827.

Location. 45° 13.361′ N, 72° 33.11′ W. Marker is near Knowlton, Québec, in Brome-Missisquoi. Marker is at the intersection of Centre and Tibbits Hill, on the right when traveling east on Centre. Touch for map. Marker is at or near this postal address: 107 du Centre, Knowlton QC J0E 1V0, Canada. Touch for directions.

More about this marker. The marker is attached to the door of the old schoolhouse. The English text is preceded by the same text in French. 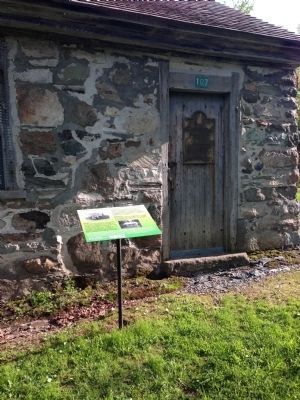 Photographed By Jacques Titolo, May 2014
2. Tibbits Hill School Marker
(Marker is attached to the door of the old schoolhouse, descriptive marker is in the foreground)

Click or scan to see
this page online
1827, a small school opened its doors on this site. In 1846, the building made of squared logs was replaced by the present building. Schoolchildren sat on stumps. Later, benches were built where the students sat four per bench. Starting in 1910, new floors, a new stove and new desks were installed, but in 1928, the school closed its doors. The building was given to the Brome County Historical Society in 1937. In 1964, on the occasion of the 100th anniversary of Quebec's Protestant institutions, the society transformed the school into a museum. The former school now displays a commemorative plaque from Quebec's monuments and historic sites commission. Architecture: The building was built on the foundations of a square log house built in 1827. With its stocky appearance and square structure, the school looks like a pioneer house. 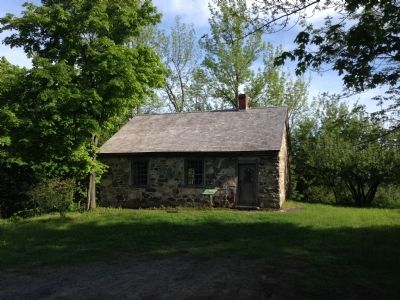