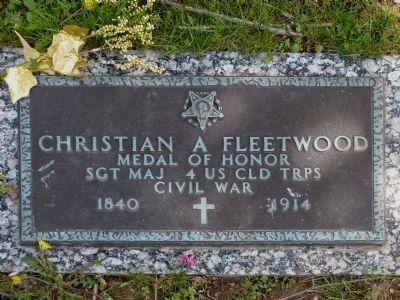 Topics and series. This memorial is listed in these topic lists: African Americans • War, US Civil. In addition, it is included in the Medal of Honor Recipients series list. 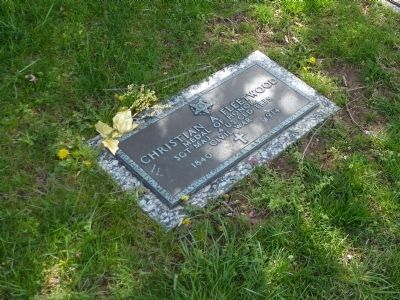 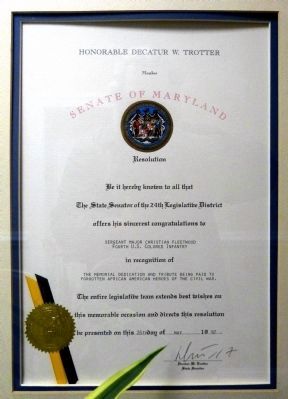 Photographed By Allen C. Browne, April 19, 2014
3. Resolution
Be it hereby known to all that The State Senator of the 24th District offers his sincerest congratulations to Sergeant Major Christian Fleetwood, Fourth U.S. Colored Infantry. The entire legislative team extends best wishes on this memorable occasion and directs this resolution be presented on this 26th day of May 1997.
Decatur W. Trotter
State Senator
from a display in the Harmony Memorial Park Office 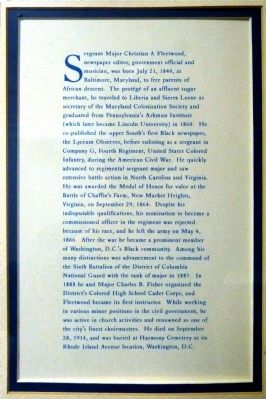 Photographed By Allen C. Browne, April 19, 2014
4. Biography
Sergeant Major Christian A. Fleetwood, newspaper editor, government official and musician, was born July 21 1840, at Baltimore Maryland, to free parents of African Descent. The Protégé of an affluent sugar merchant, he traveled to Liberia and Sierra Leone as secretary of the Maryland Colonization Society and graduated from Pennsylvania's Ashmun Institute (which later became Lincoln University) in 1860. He co-published the upper South's first Black newspaper, the Lyceum Observer, before enlisting as a sergeant in Company G, Fourth Regiment, United States Colored Infantry, during the American Civil War. He quickly advanced to regimental sergeant major and saw extensive battle action in North Carolina and Virginia. He was awarded the Medal of Honor for valor a the Battle of Chaffin's Farm, New Market Heights, Virginia, on September 29, 1864. Despite his indisputable qualifications, his nomination to become a commissioned officer was rejected because of his race, and he left the army on May 4, 1866. After the war he became a prominent member of Washington, D. C.'s Black community. Among his many distinctions was advancement to the command of the Sixth Battalion of the District of Columbia National Guard with the rank of major in 1887. In 1888 he and Major Charles B. Fisher organized the Districts Colored High School Cadet Corps, and Fleetwood became its first instructor. While working in various minor positions in the civil government, he was active in church activities and renowned as one of the city's finest choirmasters. He died September 28, 1914, and was buried at Harmony Cemetery at its Rhode Island Avenue location, Washington D. C.
from a display in the Harmony Memorial Park Office 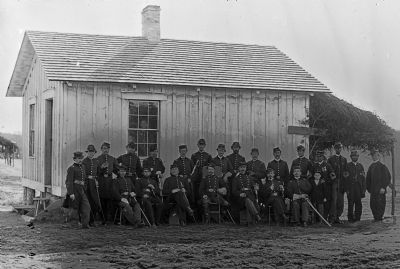 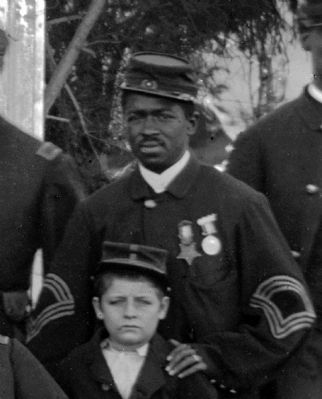