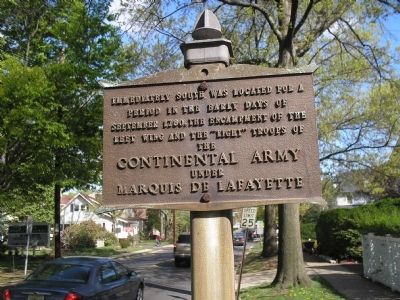 Immediately south was located for a period in the early days of September 1780, the encampment of the left wing of the "light" troop of the
Continental Army
under
Marquis de Lafayette.

Topics. This historical marker is listed in this topic list: War, US Revolutionary. A significant historical month for this entry is September 1780.

Location. 40° 51.743′ N, 73° 59.342′ W. Marker is in Leonia, New Jersey, in Bergen County. Marker is on Fort Lee Road, on the right when traveling east. Marker is located across the street from the Leonia Public Library. Touch for map. Marker is at or near this postal address: 228 Fort Lee Road, Leonia NJ 07605, United States of America. Touch for directions.

Other nearby markers. At least 8 other markers are within walking distance of this marker. George Washington Memorial Monument (about 600 feet away, measured in a direct line); Days Tavern (approx. 0.2 miles away); Cole – Allaire – Boyd House (approx. ¼ mile away); Dutch Reformed Church (approx. 0.3 miles away); March to Trenton (approx. half a mile away); Leonia Patent (approx. 0.6 miles away); Civil War Armory and Drill Hall 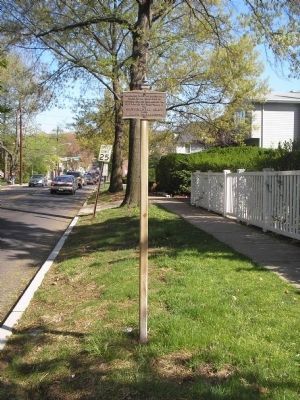 Photographed By Bill Coughlin, April 29, 2008
2. Marker on Fort Lee Road
The area south of the marker, that in September of 1780 was an encampment for the Continental Army, is now the location of private homes. 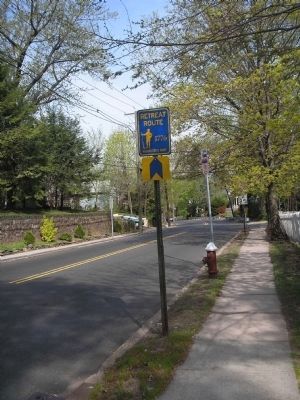