The Steele Home for Needy Children 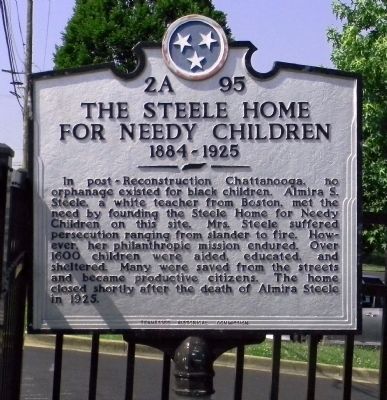 In post – Reconstruction Chattanooga no orphanage existed for black children. Almira S. Steele, a white teacher from Boston, met the need by founding the Steele Home for Needy Children on this site. Mrs. Steele suffered persecution ranging from slander to fire. However, her philanthropic mission endured. Over 1600 children were aided, educated, and sheltered. Many were saved from the streets and became productive citizens. The home closed shortly after the death of Almira Steele in 1925.

Marker series. This marker is included in the Tennessee Historical Commission marker series.

Location. 35° 2.865′ N, 85° 17.626′ W. Marker is in Chattanooga, Tennessee, in Hamilton County. Marker is on Palmetto Street 0.1 miles south of East Third Street, on the right when traveling south. The marker is located at the Challenger STEM Learning Center at the southeast corner of the Challenger Field on the campus of the University of Tennessee 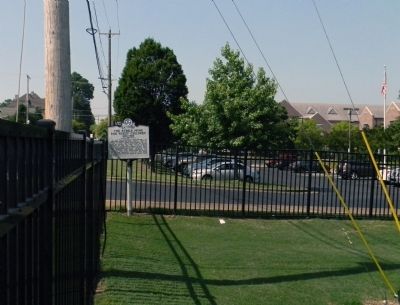 By PaulwC3, June 17, 2014
2. Wide view of The Steele Home for Needy Children Marker
at Chattanooga. It is within the secured fenced-in athletic fields, but can be viewed by the street. Touch for map. Marker is at or near this postal address: 855 East Fifth Street, Chattanooga TN 37403, United States of America. Touch for directions.