Martin was First Settled a Year Before Michigan Became a State 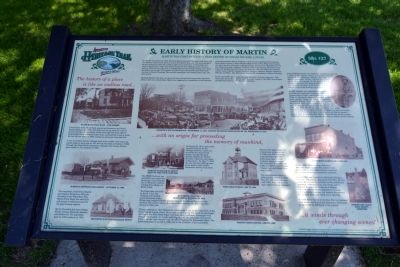 On the 8th day of January, 1836, Mumford Eldred along with his second wife, Jane, and five children, settled on 40 acres in section 29 of Martin Township. The land included a 30 acre clearing on which the northern edge lived a small band of Potawatomi and Ottawa Indians. Four weeks later, Eldred bought 40 more adjoining acres, where he built an 18x18 foot log cabin with a shingled roof and one six-light window, near where the library now stands. On December 10, 1836, Samuel Eldred, the first white child was born in Martin Township. His youthful companions were chiefly Indian lads, who lived nearby.

Mumford Eldred’s wife, Jane, was given the honor of naming the community. She chose Albion, which was already taken. Martin was suggested as a compliment to the President of the United States, Martin Van Buren, which was then approved by the pioneers. Early Martin settlers to follow Mumford Eldred were Calvin White from Canada, who built the first brick home in Allegan County, known as the “Red Brick Inn” of Gun Plains Township, brothers, William T., Walter and Thomas Monteith Jr. And Cottom M. Kimball from New York State. Between 1837

In the early 1840's the Presbyterian and Methodist Churches organized. They dominated church life in Martin until the Dutch settled in the 1920's and brought the Reformed and Christian Reformed Doctrines.

Construction of the Plank Road, connecting Kalamazoo and Grand Rapids, began in the 1850's. Sawmills were set up along the route to process the oak and elm planks, which were eight foot long, eight to twelve inches wide and three inches thick, costing $1400 a mile to build. Its first toll was taken in 1855, costing one penny per horse per mile.

It was a traveler’s dream, although short lived, as after a few years the planks began to warp and rot. The last toll was taken in October of 1869. Through the Plank Road’s spectacular, although brief success, Martin grew rapidly to 734 residents by 1860.

The completion of the Grand Rapids and Indiana Railroad in 1870 was the death of the Plank Road. The Martin Train Depot was soon built and became a refueling station for the wood burning engines. 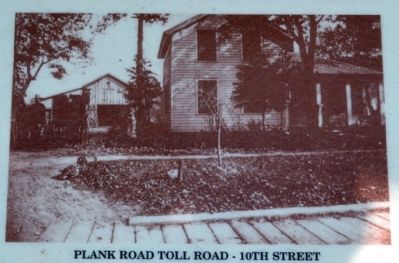 Photographed By Duane Hall, May 30, 2014
3. Plank Road Toll Road - 10th Street
Close-up of image on marker
construction contracts were let for the Michigan Railway, a third rail electrified line from Grand Rapids, through Wayland, Bradley, Shelbyville, Martin, Monteith, Plainwell and Cooper to Kalamazoo. By May 17, 1915 the line was open offering some of the fastest, most modern Interurban service in the state.

The DT&M Railroad was electrified and crossed the Kalamazoo, Grand Rapids line at Monteith Junction, running from Allegan to Battle Creek.

The Interurban cars built by the St. Louis Car Company were decked out in dark green paint, 68 feet long, weighed 142,600 pounds, traveled 75 miles per hour and were powered with traction motors that drew 2400 volts from the third rail, later reduced to 1200 volts.

Thirsty residents of “dry” Kalamazoo would make a run on the Interurban to the Grand Rapids Liquor stores. Kalamazoo police were on the watch for passengers arriving at the Rose Street Depot with large heavy suitcases. Passengers who went on the whiskey run would make friends with the motorman who slowed down to let the “rum runners” hop off, before reaching the Kalamazoo Depot. The Interurban came to an end in 1929, due to the invention of the automobile. 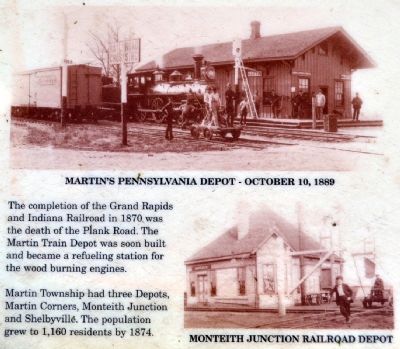 The school burned down in 1908 and was rebuilt in 1909. This new structure was used until 1965, when our present high school building replaced it.

James Redpath became one of Martin’s residents to carve out a place in the nation’s history. A journalist, Redpath started at the Kalamazoo Gazette, then went to a Detroit newspaper writing anti-slavery articles, which attracted attention of the famous Horace Greeley of the New York Tribune. James Redpath was hired as an editor of the Tribune and was sent on a tour of the Southern slave states.

In 1865, Redpath was appointed superintendent of schools for Charleston, South Carolina where General John A. Logan commanded the military. While in Charleston, Redpath, appalled to find cattle grazing among the graves of the Union Cemetery, formed a society to fence and maintain the grounds. They agreed to dedicate one day, each year, to decorate the graves with flowers. On May 1, 1865, the first Decoration Day ceremony took place. General Logan was so taken with the ceremony that when he became commander of the Grand Army of the Republic in 1868, he issued a general order to designate May 30th as Memorial Day, for the purpose of decorating the graves of comrades who died in defense of their country. 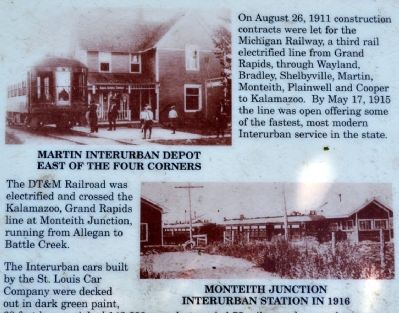 Photographed By Duane Hall, May 30, 2014
5. Martin Township Interurban Stations
Close-up of image on marker
Martin’s most celebrated historical figure, Andrew Bee, settled in the community as a tin smith and was employed by Andrew Patterson, a hardware merchant.

Andrew Bee was a private in the fourth Michigan Cavalry - Company L, during the Civil War. He was said to be the first to lay hands on the confederate president, Jefferson Davis, when forces led by General Benjamin D. Pritchard of Allegan captured him. Davis was disguised inn woman’s clothing trying to escape, but Andrew Bee noticed his military boots and called out to stop him.

Andrew Bee is buried in the East Martin Cemetery with words inscribed on his tombstone, “First man to lay hands on Jeff Davis at this capture”.

Topics and series. This historical marker is listed in these topic lists: Railroads & Streetcars • Roads & Vehicles • Settlements & Settlers. In addition, it is included in the Former U.S. Presidents: #08 Martin Van Buren series list. A significant historical month for this entry is January 1836. 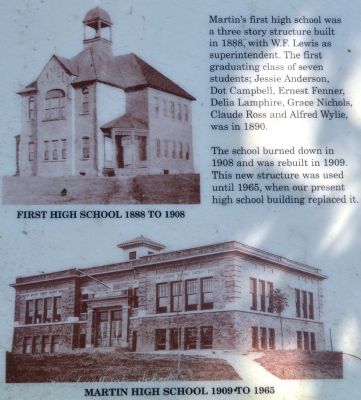 Photographed By Duane Hall, May 30, 2014
6. Martin High Schools
Close-up of image on marker
next to the parking lot for the Martin Township Community Building. Touch for map. Marker is in this post office area: Martin MI 49070, United States of America. Touch for directions.

More about this marker. The marker is at Site #27 of the Allegan County Heritage Trail (driving tour). 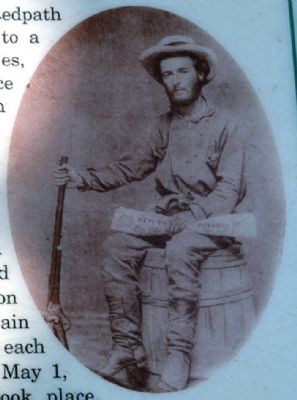 Photographed By Duane Hall, May 30, 2014
7. James Redpath
Close-up of image on marker 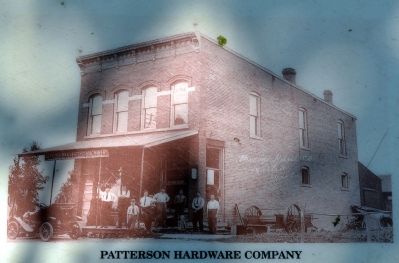 Photographed By Duane Hall, May 30, 2014
8. Patterson Hardware Company
Close-up of image on marker 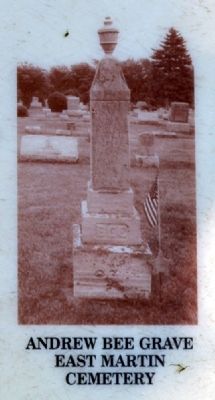 Photographed By Duane Hall, May 30, 2014
9. Andrew Bee Grave
Close-up of image on marker 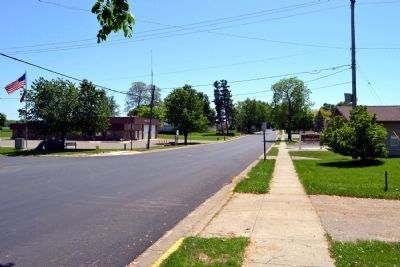 Photographed By Duane Hall, May 30, 2014
10. Early History of Martin Marker
View to south along 10th Street 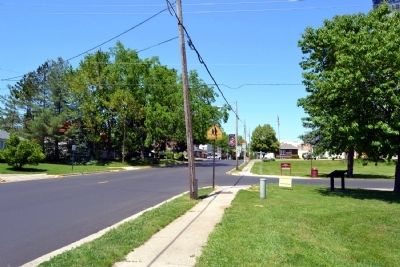 Photographed By Duane Hall, May 30, 2014
11. Early History of Martin Marker
View to north along 10th Street towards downtown 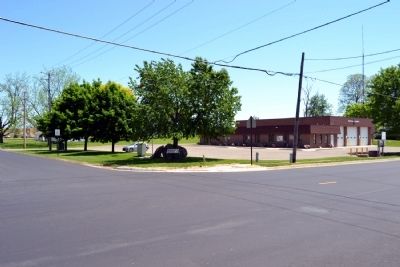