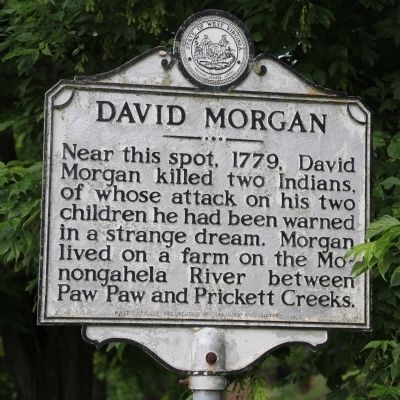 By J. J. Prats, June 21, 2014
1. David Morgan Marker
Inscription.
David Morgan. . Near this spot, 1779, David Morgan killed two Indians, of whose attack on his two children he had been warned in a strange dream. Morgan lived on a farm on the Monongahela River between Paw Paw and Prickett Creeks. . This historical marker was erected in 1975 by West Virginia Department of Archives and History. It is in Rivesville in Marion County West Virginia

Near this spot, 1779, David Morgan killed two Indians, of whose attack on his two children he had been warned in a strange dream. Morgan lived on a farm on the Monongahela River between Paw Paw and Prickett Creeks.

Erected 1975 by West Virginia Department of Archives and History.

Topics and series. This historical marker is listed in these topic lists: Native Americans • Settlements & Settlers. In addition, it is included in the West Virginia Archives and History series list.

Other nearby markers. At least 8 other markers are within 3 miles of this marker, measured as the crow flies. Fort Pawpaw (here, next to this marker); Veterans Memorial (approx. 0.3 miles away); Prickett's Fort (approx. 1.8 miles away); Graves of the Pierponts (approx. 2.8 miles away); a different marker also named Prickett’s Fort 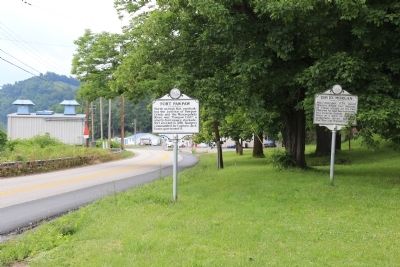 Also see . . .  Capt. David Morgan Morgan, Sr. (1721 - 1813). Geni.com entry. “Morgan was 57, and on his sick-bed at the time. In a feverish dream, "he saw" 2 of his children running around scalped and bleeding. It is said that he jumped out of his sick-bed, rushed out through the open fort gates, and found 2 of his children meandering down the cow path looking for a stray. He called to them to get back to the fort, and as they did, 2 braves attacked. David scuffled with one and managed to kill him, and was on the run through the gates when the tomahawk hit him squarely on the back of his head. Had he not thrown up his hand, he no doubt would have died then and there.”

“Like his friend (and relation by marriage) Captain Jacob Prickett, David was a frontiersman on par with the legendary Daniel Boone. Jake and David had a lot of experience fighting American Indians, and in fact, at the time of his death, had missing fingers from an Indian tomahawk hurled at the back of his head, (He was herding his children back into the fort, on the run, as he threw up his hand to protect the back of his skull—the tomahawk struck and severed his fingers.” (Submitted on June 21, 2014.)
Credits. This page was last revised on June 16, 2016. It was originally submitted on June 21, 2014, by J. J. Prats of Powell, Ohio. This page has been viewed 353 times since then and 6 times this year. Photos:   1, 2. submitted on June 21, 2014, by J. J. Prats of Powell, Ohio.
Share This Page.