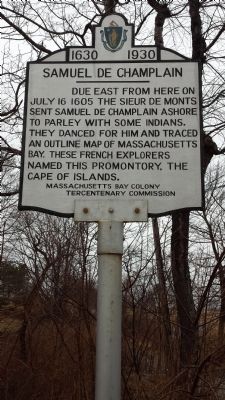 Due east from here on July 16 1605 the Sieur De Monts sent Samuel De Champlain ashore to parley with some Indians. They danced for him and traced an outline map of Massachusetts Bay. These French explorers named this promontory, The Cape of Islands.

Topics and series. This historical marker is listed in these topic lists: Exploration • Native Americans. In addition, it is included in the Massachusetts Bay Colony—Tercentenary Commission Markers series list.