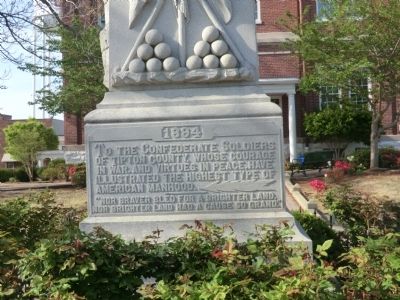 To the Confederate soldiers of Tipton County, whose courage in war, and virtues in peace, have illustrated the highest type of American manhood.

Erected by Citizens of Covington and Tipton County. (Marker Number 1894.)

Location. 35° 33.831′ N, 89° 38.779′ W. Marker is in Covington, Tennessee, in Tipton County. Memorial is at the intersection of West Pleasant Avenue (Tennessee Route 54) and South Main Street (Tennessee Route 59), on the left when traveling east on West Pleasant Avenue. The monument is on the grounds of the Tipton County Courthouse. Touch for map. Marker is in this post office area: Covington TN 38019, United States of America. Touch for directions.

Other nearby markers. At least 8 other markers are within walking distance of this marker. Tipton County in the Civil War (a few steps from this marker); Thomas Goode (about 700 feet away, measured in a direct line); Cadmus Marcellus Wilcox (approx. ¼ mile away); 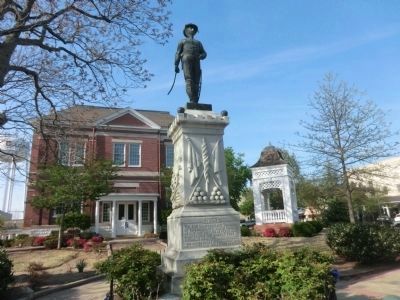 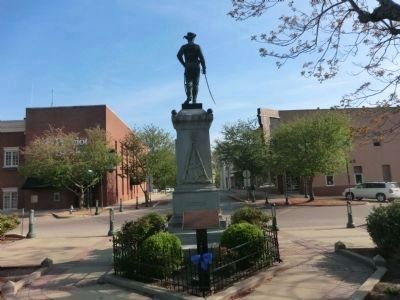 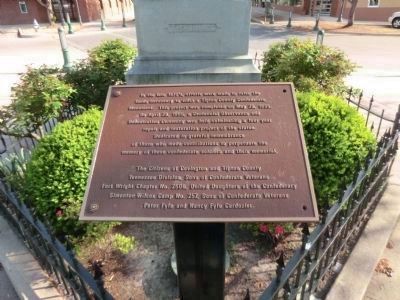 By Don Morfe, April 19, 2014
4. Tipton County Confederate Monument
In the late 1870's, efforts were made to raise the funds necessary to erect a Tipton County Confederate Monument. This project was completed on May 29, 1895. On April 29, 1995, a Centennial Observance and Rededication Ceremony was held culminating a four year repair and restoration project of the statue. Dedicated in grateful remembrance of those who made contributions to perpetuate the memory of these Confederate soldiers and their memorial.
Credits. This page was last revised on June 16, 2016. It was originally submitted on June 23, 2014, by Don Morfe of Baltimore, Maryland. This page has been viewed 685 times since then and 32 times this year. Photos:   1, 2, 3, 4. submitted on June 23, 2014, by Don Morfe of Baltimore, Maryland. • Bernard Fisher was the editor who published this page.
Share this page.