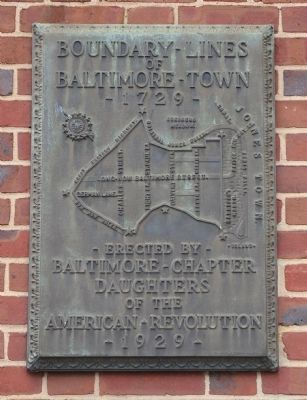 [This marker portrays the subject in a pictorial manner. It shows the major streets of Baltimore in 1729. The six stars on the map represent the locations of this and five other identical markers.]

Erected 1929 by the Baltimore Chapter, Daughters of the American Revolution.

Topics and series. This historical marker is listed in these topic lists: Colonial Era • Settlements & Settlers. In addition, it is included in the Daughters of the American Revolution series list. A significant historical year for this entry is 1729. 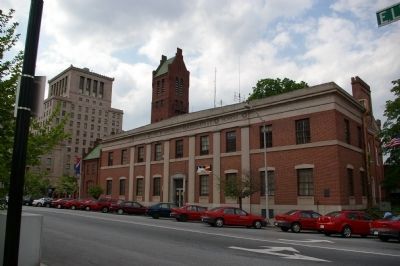 By Christopher Busta-Peck, April 30, 2008
2. Fire Department Headquarters building
The marker is in the right corner.

More about this marker. Of six identical markers, this appears to be the only one remaining. At the very least, it is the only one at or near its original location. The five other markers were likely lost when the buildings that they were placed on were demolished. This marker is in the location of the star in the upper right corner of the map.

The marker was cast by J. Arthur Limerick, Founders, Baltimore. It was designed by R. Foxhall Nolley.

An article describing the markers, from the Baltimore Sun, dated September 10, 1929, reads as follows:
The Daughters of the American Revolution yesterday made public plans for dedicating six tablets marking the boundaries of the old city of Baltimore, in connection with the opening exercises of the Bi-Centennial celebration Thursday. The tablets will be presented to the city at noon.
Members of historical associations are asked to attend the ceremonies which will be held at the following locations and will be in charge of the groups named:
Mayor Broening To Speak
At the Civic Center, Holliday and Lexington streets, Mayor Broening will accept the tablet which will be presented to the city by Mrs. Ferdinand B. Focke. The Mayor will make a brief address.
The tablet in the wall of Parish Bros.' Building, Lombard street and Exchange Place, will be presented by Mrs. William F. Rogers, on behalf of the Daughters. It will be accepted by former Mayor J. Barry Mahool.
A third tablet, in the United States Fidelity and Guaranty Building, Water and Calvert streets, will be presented by Mrs. George W. Slosum and accepted by former Mayor James H. Preston.
At Charles and Balderston streets, Mrs. Samuel Alexander Hill, chaplain of the Baltimore Chapter of the Daughters, has been appointed to unveil the tablet. It will be accepted by Judge Walter I. Dawkins.
Bryant To Accept Tablet
Mrs. Herman Lohmeyer will present and Howard Bryant, President of the City Council, will accept the memorial in the wall of Miller Bros. & Co., Northeast corner of Redwood street and Hopkins place. In the Daily Record Building, Saratoga street and Church lane, Mrs. Frederick T. Mosher will present the tablet which will be accepted by Theodore R. McKeldin, secretary to Mayor Broening.
The tablets are of bronze and measure two feet by three feet. They are a gift of the Baltimore Chapter of the Daughters, in memory of the survey of Baltimore Town two hundred years ago. 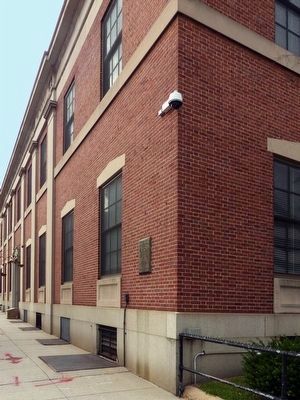 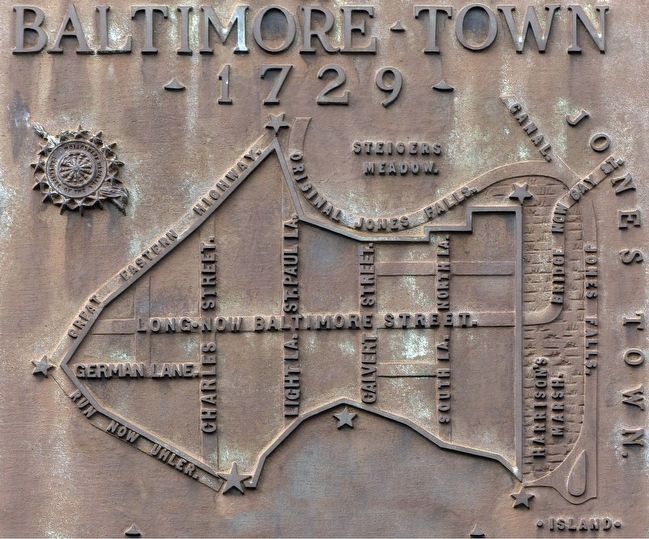 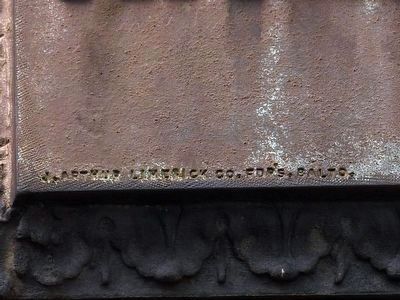